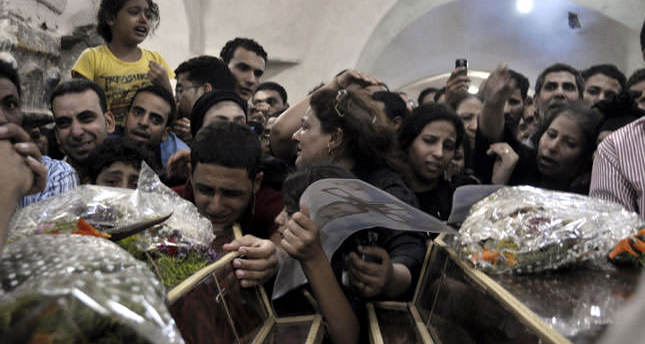 by Daily Sabah Oct 03, 2014 12:00 am
Human Rights Watch's (HRW) have moved to clarify the details of how their investigation in the Rabaa Square massacre and protest murders was carried in response to a number of statements issued by Egyptian authorities levying a series of accusations against the report. Ever since the release of the report called "Sll according to plan," the organization has faced numerous accusations by the Egyptian authorities as they condemned the work and presence of Human Rights Watch in Egypt while releasing "inaccurate" reports on the conduct of the investigation. HRW also claimed that after the release of the report two senior HRW staff, who intended to release the report in Cairo and brief Egyptian independent groups, journalists, and authorities on its findings, faced anger as their entry to the country was denied by Egypt.

After a year-long investigation into the conduct of Egyptian security forces who responded aggressively to demonstrations, HRW stated that during this period they came to the conclusion, on the basis of the interviews that HRW staff made with more than 200 key witnesses, that "[victims of the mass killings] included protesters, doctors, local residents, and independent journalists."

The HRW report on the Rabaa massacre released on Aug. 12 revealed the systematic and intentional use of excessive lethal force by police and army forces that resulted in the mass killings of protesters on a scale unprecedented in Egypt. With regard to the events in Rabaa square, the 188-page report on Egypt's mass killings between July 5 and Aug. 17, 2013 proved that "the Egyptian police and army methodically opened fire with live ammunition on crowds of demonstrators opposed to the military's July 3 ouster of Mohamed Morsi," Egypt's first democratically elected president.

The events that took place at Rabaa square are now seen as an unprecedented massacre, more than just a blip in Egyptian history. At least 817 demonstrators were systematically killed by Egyptian security forces that fired on crowds with live ammunition in July and August 2013, in turn proving crimes against humanity.

After the toppling of the first democratically elected President Mohammed Morsi by a bloody military coup, headed by the incumbent President and former General Abdel-Fattah el-Sissi, the human rights violations have increased under the rule of el-Sissi. Egypt's military-backed authorities have waged a relentless crackdown on members of the Muslim Brotherhood – supporters of Morsi. After members of the Muslim Brotherhood were declared as possible targets, many Brotherhood members have been arrested on charges of inciting violence and joining a so-called "terrorist" group. In addition to military trials for civilians, Egyptian authorities ordered the suspension of the Cairo-based NGO that proves the worsening human rights situation under the rule of el-Sissi.