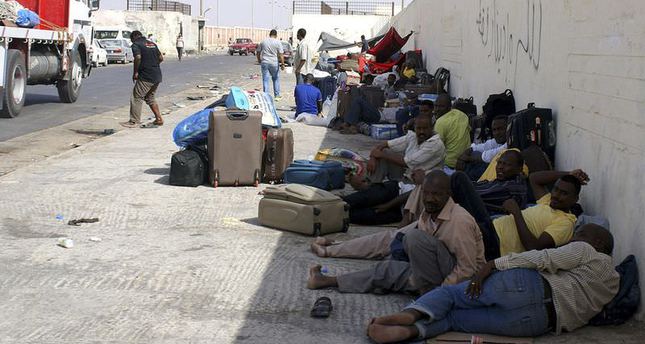 by Daily Sabah Oct 13, 2014 12:00 am
As violence has stepped up in conflict-torn Libya, almost 290,000 people have been internally displaced due to fighting between rival armed groups, the United Nations High Commissioner for Refugees (UNHCR) stated on Oct. 10.

As clashes continue unabated, the humanitarian situation in many areas where the fighting initially erupted is reportedly deteriorating. Tens of thousands of Libyans are now facing serious challenges as there is growing need for "food, health care and other basic commodities as well as adequate shelter for the approaching winter." "The UNHCR and its partners are responding to some of these needs, but we face major constraints in access," U.N. agency spokesman Adrian Edwards told journalists in Geneva.

The U.N. agency reports that some 100,000 people have fled from violence that erupted on the outskirts of Tripoli in the last three weeks alone. The eastern city of Benghazi, one of the worst hit cities, is another area of displacement, as some 15,000 people are reportedly displaced.

The U.N. Secretary-General Ban Ki-moon flew to Tripoli on Saturday to call on the warring factions to end the violence by establishing a political dialogue. "There is no alternative to dialogue," said the U.N. secretary general. "It is my conviction that all problems in Libya can be solved through dialogue. Nevertheless, we understand that the path will be long and difficult. Peace building always is," he added.

The Benina International Airport, the second-largest in the country after Tripoli International Airport, plays a crucial role in clashes due to its strategic location. It is a top target for militant groups, as suggested by the fact that much of the fighting has been taking place around the airport. Due to security measures, all flights to the airport have been suspended since July 17. Apart from the eastern city of Benghazi, Tripoli, the capital city, has also suffered from the escalating violence due to increasing clashes between rogue brigades vying for control over the Tripoli International Airport, another strategic point, that led to an all-out battle for control of the entire capital city. The two main armed militias, Zintanis and Misratans have been fighting in order to seize control of key installations.