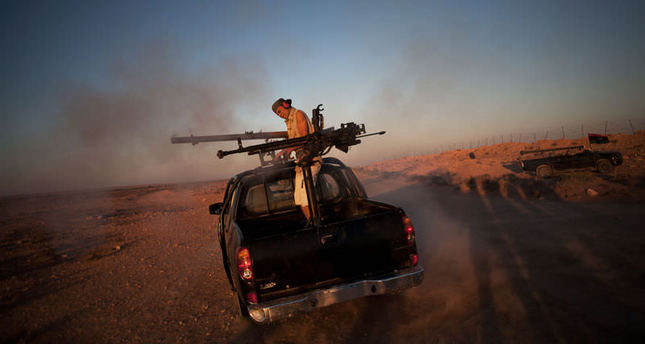 by AA Oct 15, 2014 12:00 am
Four people were killed and eight others injured on Wednesday when troops loyal to retired Libyan general Khalifa Haftar launched attacks against the western Libyan town of Kikla, a member of the Libyan parliament said.

"The town was attacked with rockets by troops loyal Haftar," lawmaker Akram Shanioh, who had decided to boycott parliament sessions, told Anadolu Agency.

He added that Haftar's troops continued to attack the town, which forced its residents to flee. Shanioh said Kikla has been the site of clashes between Haftar's troops and Islamists for four days now.

The lawmaker said more than 50 people were killed and 100 others injured during these four days of fighting in Kikla.

Libya has been dogged by political instability since the 2011 ouster and death of longstanding ruler Muammar Gaddafi.

Ever since, rival militias have locked horns, bringing violence to Libya's main cities, including capital Tripoli and the eastern city of Benghazi-while the Libyan government has appeared absent from the scene.

The sharp divisions have yielded two rival seats of government in the country, each of which has its own institutions.

Two assemblies currently vie for legislative authority: the newly-elected House of Representatives, which convenes in the eastern city of Tobruk; and the General National Congress, which-even though its mandate ended in August-continues to convene in capital Tripoli.