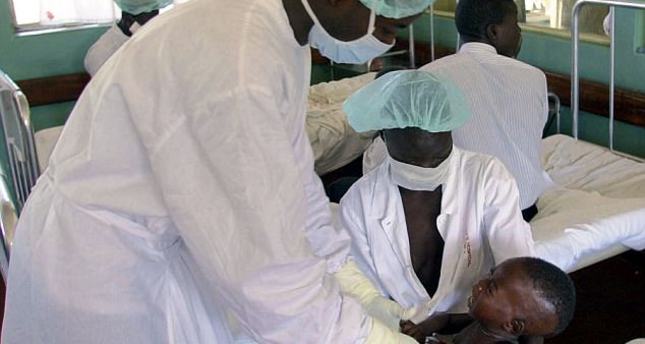 by Associated Press Oct 22, 2014 12:00 am
A new study underscores the potential danger of airplane passengers infected with Ebola leaving West Africa: If there were no exit screening in place, researchers estimate that three people with the disease might fly out of the region each month. The hardest-hit West African nations have been checking passengers since summer, but the new work is a reminder of how much easier it could be for the virus to travel outside the outbreak region if those measures weren't in place and that screening cannot catch every case. Since the Ebola outbreak was first identified in March, there have been only two known exported cases involving flights, one before and one after screening began in Liberia. A Liberian-American flew to Nigeria in July and sparked a small outbreak there, which has since been contained. The second man, Liberian Thomas Eric Duncan, passed a screening when he left for the U.S. last month; he didn't have a fever or symptoms until days after arriving in Dallas. For the study, researchers used international flight data and Ebola case tallies to calculate that without screening three infected people a month could fly out of the region. They noted that screening isn't foolproof: It can take up to three weeks for people exposed to Ebola to develop symptoms, so it is likely some cases will slip through.

The out-of-control epidemic has killed an estimated 4,500 people. "As the outbreak grows, we will be seeing more international exportations of Ebola," said Dr. Kamran Kahn of St. Michael's Hospital in Toronto, the study's senior author. He added that disaster could strike if people with Ebola fly to less developed countries. "What might happen if cases were to wind up in a slum in Nairobi or Mumbai?" Kahn noted that there were few flights from the West Africa nations of Guinea, Sierra Leone and Liberia even before the outbreak. He and his colleagues calculated that countries most at risk of getting imported Ebola cases are the nearby Ghana and Senegal, followed by Britain and France.

The U.S. was significantly further down the list, followed by India, Kenya and Germany. The study was published online Monday in the journal Lancet. "There are more and more cases of Ebola every week so the risk of exportation is also increasing every week," said Benjamin Cowling of the School of Public Health at the University of Hong Kong, who co-authored a commentary.