WHO aims for Ebola serum as West increases safeguards 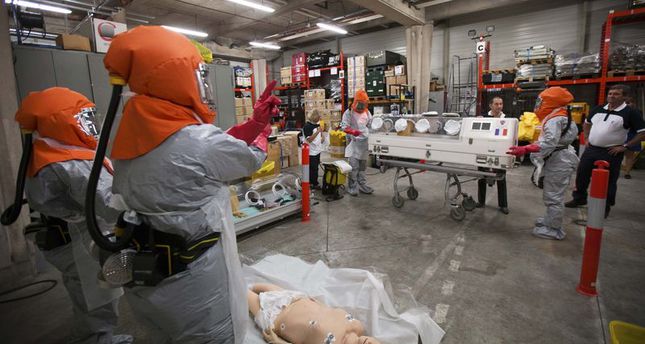 Although Western countries seek to find a solution to stop Ebola quickly spreading by developing new medicine, no result has been reached so far and the disease continues to cause deaths in Western Africa

Amid fears of the spread of the current Ebola outbreak across Western countries, the World Health Organization (WHO) announced that a treatment using serum made from the blood of recovered Ebola patients would be tested and available for use in Liberia by January 2015. "This week, Switzerland will be receiving its first Ebola vaccines for testing." Dr. Marie Paule Kieny, an assistant director general at the WHO, said in Geneva on Wednesday. "Many WHO staff, including myself, are volunteering to test these new vaccines," she added. With Ebola serum treatment, tens of thousands of people in West Africa, including healthcare workers at high risk of infection, will be able to start receiving Ebola vaccines by January.

The U.N.'s health agency expects to begin testing the two experimental Ebola vaccines on more than 20,000 frontline health care workers and others in West Africa. After trial products, much more of the vaccine is expected to be distributed in Ebola-hit African countries. As the Ebola serum signals a positive move to treat and prevent Ebola epidemic across many countries, a top Red Cross official stated that the "epidemic can be contained within four to six months" under conditions of "good isolation, good treatment of the cases which are confirmed, good dignified and safe burials of deceased people."

Following the WHO's Ebola serum project, international companies have accelerated their work on experimental vaccine, while racing to develop the first approved Ebola vaccine. Johnson&Johnson, an international consumer health company, aims to produce 1 million doses next year, while investing up to $200 million to accelerate the program. The company expects 250,000 doses of Ebola serum to be available by May 2015. "We are urgently working to provide our vaccine expertise, production capabilities, our people and resources to address the Ebola crisis," said Alex Gorsky, chairman and CEO of Johnson & Johnson, showing promising signs for vaccine development. GlaxoSmithKline and NewLink Genetics are among other health companies racing to develop products for Ebola.

In addition to blood serum treatment, some preventive measures have been taken so far by conducting enhanced screening at international airports and Ebola training at hospitals. The United Stated Department of Homeland Security has announced that restrictions imposed on passengers travelling from Liberia, Sierra Leone or Guinea are due to go into effect on Wednesday in order to prevent more Ebola cases in the United States. Travel bans on passengers from the hardest-hit African countries were criticized by the Red Cross head saying Ebola travel bans are "irrational." "It [Ebola] creates a lot of fear and extreme panic that sometimes leads to very irrational types of behaviors and measures, like closing borders, cancelling flights, isolating countries, et cetera," Elhadj As Sy, secretary-general of the International Federation of Red Cross and Red Crescent Societies (IFRC) told reporters in Beijing during the IFRC conference on Wednesday. "Those are not solutions. The only solution is how we can join our efforts to contain those kinds of viruses and epidemics at their epicenter, right where they start," he added.

The Ebola outbreak has killed more than 4,500 people – most of them in Liberia, Sierra Leone and Guinea, according to the WHO. There have been a number of cases in Spain and the United States. Istanbul / Daily Sabah