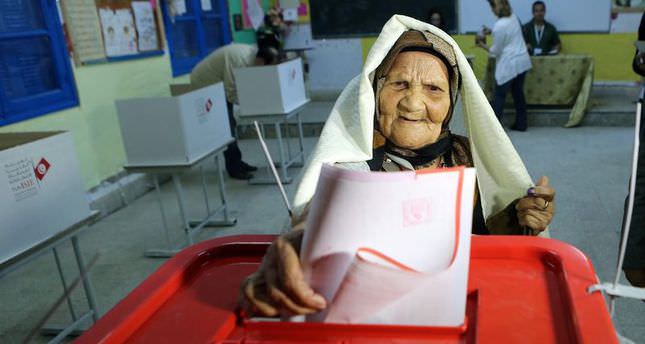 by Daily Sabah Oct 27, 2014 12:00 am
The first comprehensive legislative elections were held on Sunday after the ouster of former President Zine El Abidine Ben Ali. Sunday's parliamentary election is of crucial importance for Tunisia, as it signaled a significant step on the tortuous path to democratic transition that the country has been awaiting. As the partial results from the official election commission were released throughout Monday, the Secular Call of Tunisia party won more seats than any other party in the 217-member parliament, while Tunisia's Ennahda party came in second place. The Ennahda party, which was expected to secure more votes in surveys carried out before the polls, congratulated the rival Nida party while conceding defeat in the parliamentary elections.

Nevzat Çiçek, an investigative journalist and expert on the Middle East, stressed the importance of Sunday's parliamentary election in changing the country's future through a voting system based on free will. Çiçek describes Sunday's election, along with the upcoming presidential election as a "last resort" in building faith in democracy in the mind of Tunisians.

The Call of Tunisia won 38 percent of the parliament's 217 seats while the Islamist Ennahda came second with 31 percent, Anadolu Agency reported. As no party won the majority of the seats, the Call of Tunisia, led by former Premier Beji Caid el Sebsi, will form the new coalition government through forming alliances with other parties. According to the official election results, Call of Tunisia won 83 seats, Ennahda won 68, Free Patriotic Union won 17, Popular Front won 12 and Afek Tounes won nine seats.

Another considerable step will4 be the presidential election, which will be held on Nov. 27. An important consideration is that both elections come in wake of a new constitution adopted on Jan. 27 that "include[s] a comprehensive list of rights and freedoms and strong guarantees against their violation," Human Rights Watch (HRW) reported. All of these are considered as important steps for the transition to democracy of Tunisia that has been long suffered under the long leadership of ousted president Ben Ali who led Tunisia for 23 years before stepping down in January 2011. During his presidency, Ben Ali faced widespread criticism for suppressing political freedoms and unfairly arresting and mistreating political dissidents.

What matters about Tunisia's parliamentary election is that the Tunisian parliamentary assembly "play[s] a crucial role in consolidating the gains of the transition by, among other things, modifying the laws to harmonize them with the new constitution." Therefore, Sunday's election is expected to shape Tunisia's future while changing the continued power of the old system that is seen as a particular threat to the country's democratic potential.