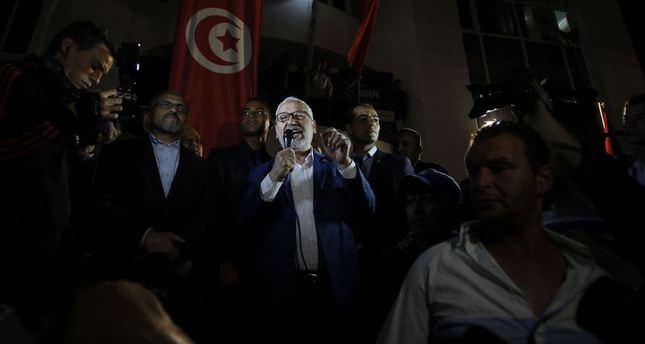 The leader of the Ennahda party, Rashid al-Ghannushi, condemned a possible return of the old single-party system saying that it would deteriorate Tunisia’s long-waited democratic transition

After the Call of Tunisia party won the majority of seats in Sunday's parliamentary elections it refused to form an alliance with the Ennahda party. The leader of the Ennahda movement, Rashid al-Ghannushi, said that they will not allow Tunisia to return to a single-party system, which would be a significant threat to the country's democratic transition. With regard to the undemocratic 23 years rule of the toppled president, Zine el-Abidine Ben Ali, Ghannushi stressed the importance of national unity for a better democratic future in Tunisia, while underscoring that terrorism and violence should not be supported. "The Ennahda party will not allow the reappearance of single-rule idols and the return of the one-part system," he said at a press conference at Ennahda's headquarters in Tunis on Monday. Sunday's parliamentary election was of crucial importance for Tunisia, as it signaled a significant step on the path to a democratic system that the country has been striving for.

Tunisia's Ennahda Movement, the strongest opposition force, was banned for two decades under Ben Ali's rule. During his presidency, Ben Ali faced widespread criticism for suppressing political freedoms and unfairly arresting and mistreating political opponents like the supporters of the Ennahda Movement. After the Jasmine revolution in 2011 that forced Ben Ali to step down, the Ennahda Movement was allowed to form a legal political party in 2011 and re-emerged as a major political force. The movement was founded in 1981 by Rachid Ghannouchi and its supporters have been inspired by the Muslim Brotherhood in Egypt. Ghannouchi returned Tunisia in 2011 after living in exile in London for almost 20 years. He was expected to run for president in the upcoming presidential election in November, however, he announced that he will not be a presidential candidate.

Tunisia's first parliamentary election was considered "transparent and credible," Annemie Neyts-Uytterbroeck, the head of the EU observer mission said on Tuesday. "The Tunisian people have reinforced their commitment to democracy with credible and transparent elections that gave Tunisians of all political tendencies a free vote," Neyts-Uytterbroeck told a news conference. "Polling day passed off in a calm and orderly fashion. Everything was really very normal," she said while adding that "freedom of expression and assembly were respected," as AFP news agency reported.

As the partial results from the official election commission were released on Monday, the secular Call of Tunisia party won more seats than any other in the 217-member parliament and the Ennahda party received the second-most seats. Call of Tunisia won 38 percent of the seats in parliament while the Ennahda party received 31 percent, Anadolu Agency (AA) reported. According to the official election results, Call of Tunisia won 83 seats, Ennahda 68, Free Patriotic Union 17, Popular Front 12 and Afek Tounes nine.