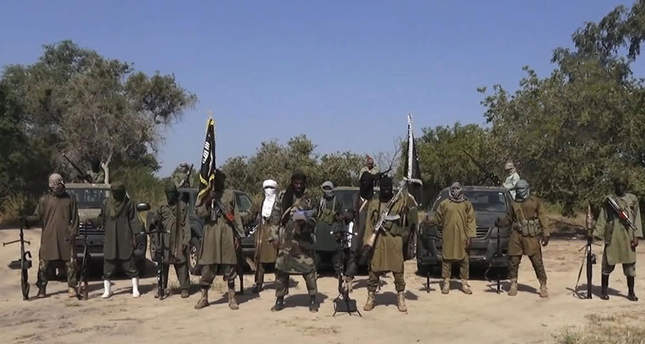 by Nov 10, 2014 12:00 am
Boko Haram were suspected of killing nearly 50 pupils on Monday in a suicide bombing in northeast Nigeria, in one of the worst attacks against schools teaching a so-called Western curriculum.

The explosion at the all-boys school in Potiskum is the latest in a series of atrocities against schoolchildren in the state of Yobe, and the second suicide attack in the town in eight days.

The massacre came just a day after the release of a new Boko Haram video in which the group's leader, Abubakar Shekau, repeated his rejection of Nigerian government claims of a ceasefire and peace talks.

Students at the Government Comprehensive Senior Science Secondary School in Potiskum were waiting to hear the principal's daily address when the explosion happened at 7:50 am (0650 GMT).

"There was an explosion detonated by a suicide bomber. We have 47 dead and 79 injured," national police spokesman Emmanuel Ojukwu said, adding that Boko Haram was believed responsible.

A teacher at the school, who asked not be identified, called the blast "thunderous", while a local described the horror of the aftermath.

Adamu Alkassim said the scene was a mass of abandoned footwear, blood and flesh, as the victims were taken to the Potiskum General Hospital, just 100 meters away.

One rescue worker involved in evacuating the students from the school said the wounded had "various degrees of injuries".

The victims are thought to be in their teens.

Boko Haram has previously carried out deadly attacks on schools teaching a so-called Western curriculum since 2009.

Boko Haram's most high-profile attack on a school came in April, when fighters kidnapped 276 girls from the town of Chibok in Borno state, also in northeast Nigeria.

More than six months later, 219 of the girls are still being held.

Potiskum, the commercial hub of Yobe state, has also been repeatedly targeted by deadly attacks blamed on Boko Haram. Last Monday, at least 15 people were killed in a suicide bombing on a Shia religious ceremony in the city. On Wednesday, 16 men arrested by the military on suspicion of links to Boko Haram were found dead with bullet wounds just hours later.

Yobe is one of three northeastern states that has been under a state of emergency since May last year to try to quell the bloody insurgency.

But violence has continued unabated and Boko Haram has seized at least two dozen towns and villages in recent months, raising doubts about the government's ability to control the region.

Boko Haram fighters were seen in a new video obtained by AFP on Sunday parading a tank in an unidentified town, which they apparently now control, and Shekau preaching to locals.

The message in the 44-minute video appeared to be aimed at reinforcing Shekau's claim that he has created a caliphate within Nigeria.