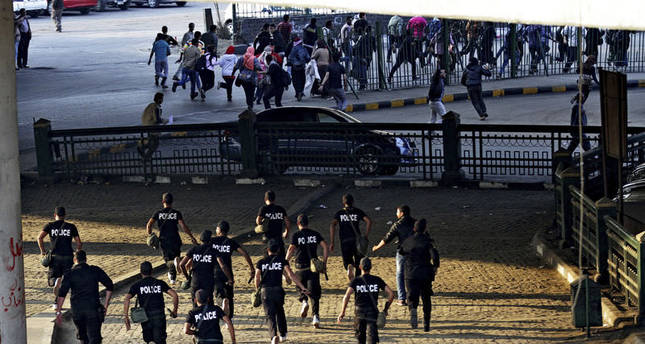 Hosni Mobarak, who ruled Egypt under a dictatorship for three decades until being ousted after the revolution in 2011 was acquitted of the accusations while the police killed two people, protesting the court rule

A judge dismissed murder charges against former President Hosni Mubarak on Saturday, and acquitted his security chief over the killing of protesters during Egypt's 2011 uprising, crushing any hope of a judicial reckoning on behalf of the hundreds victims of the revolt that toppled him.

Yet instead of outrage, a largely muted initial reaction greeted the decision in an Egypt where unlicensed protests draw stiff prison terms and many remain fearful over their security four years after the nation's Arab Spring revolt.

Some 2,000 young people protested the verdict near Cairo's Tahrir Square, the birthplace of the 2011 uprising closed off Saturday by soldiers and police though open a day earlier despite widespread fears of protests. They chanted against the military, whose former chief, Abdel-Fattah el-Sissi, is now the president. "The people want to bring down the regime!" they shouted, using one of the chief slogans in the 18-day, anti-Mubarak uprising.

In the evening, police broke up the gathering, firing water cannon and tear gas and driving protesters into side streets after supporters of the banned Muslim Brotherhood joined the protest. An Interior Ministry statement said that Brotherhood supporters pelted security forces with rocks and fought with the protesters. Security officials, speaking on condition of anonymity because they were not authorized to brief reporters, said police arrested 29 people. A statement from the health ministry early Sunday said one person was killed and nine were injured in the clashes.

The dispersal of protesters contrasted with the jubilant well-wishers who greeted Mubarak after the decision when he returned to his temporary home at a Nile-side military hospital. He later triumphantly waved back to supporters from his hospital window. A television interviewer reached him by telephone, asking whether he had ordered the killing. "I did not do anything at all," replied Mubarak, who was convicted and sentenced to life in prison in 2012 on charges related to the killing of protesters. The verdict was overturned on appeal the following year.

The monarch of close U.S. ally Bahrain, King Hamad bins Isa Al Khalifa, also called to congratulate Mubarak, according to the official news agency of the Gulf Arab island nation. Mubarak, who assumed Egypt's highest office in 1981 following the assassination of Anwar Sadat, has spent virtually all the time since he was detained in April 2011 in hospitals due to poor health. On Saturday, he came to the courtroom on a gurney, wearing dark glasses, a navy blue tie and a matching cardigan. In his ruling, judge Mahmoud al-Rashidi cited the "inadmissibility" of the case against Mubarak due to a technicality. He said Mubarak's May 2011 referral to trial by prosecutors ignored the "implicit" decision that no criminal charges be filed against him when his security chief and six of his top aides were referred to trial by the same prosecutors two months earlier.

After the decision, Cairo resident Nermine Fathy simply asked: "Who killed the martyrs? I want to know who killed the martyrs." That question likely won't be answered in Egypt's courts. Already, nearly 170 police officers and security officials put on trial in connection to the killings have either been acquitted for lack of evidence or were found to have acted in self-defense. Some received short, suspended sentences.

The Mubarak trial, however, was concerned only with the killing of 239 protesters whose names were cited in charge documents, not the nearly 900 killed in total during the 18 days of the revolt. Egyptians were angry with the decision as it was given under the rule of Sissi who has established an autocratic rule in Egypt after toppling Mohammad Morsi, the first democratically elected president.

Two Egyptians were killed and nine others wounded Saturday evening near Cairo's iconic Tahrir Square during the police dispersal of a protest by activists angered by the court verdict. Heath Ministry spokesman Hossam Abdel-Ghaffar told The Anadolu Agency that two people, both in their 20s, were killed during the violence, without revealing the cause of death.

A medical source, meanwhile, stated that the two deaths were caused by gunshots. "The events also left nine protestors wounded, some of which suffered temporary asphyxia from the teargas and others sustained wounds from birdshot," said Abdel-Ghaffar.