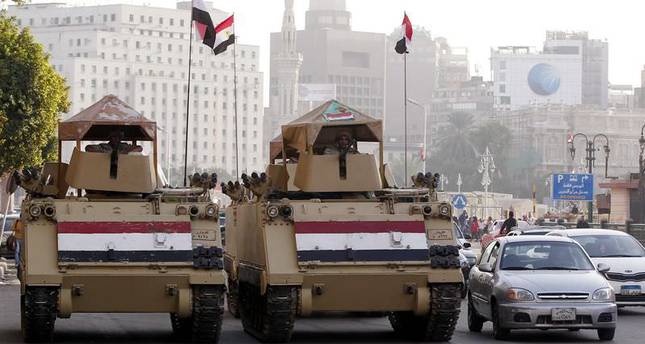 by Dec 03, 2014 12:00 am
Gaber Sayyed lost the use of his legs when an armored police vehicle crushed them during the 2011 uprising that ended Hosni Mubarak's 30-year rule and ignited hopes for a new era of freedom and accountability.

Almost four years on, he says a court's decision to drop charges against Mubarak over the killing of hundreds of demonstrators during the Tahrir Square revolt has extinguished any hope that his sacrifice would have a purpose.

"Our hope is only in God. Justice here is lost, justice is broken," he said.

Many Egyptians who lived through Mubarak's rule view it as a period of autocracy and crony capitalism. His overthrow embodied the hopes of the "Arab Spring" uprisings that shook autocrats from Tunisia to the Gulf.

His possible release after criminal charges were dropped on a technicality is seen by many as the latest in a series of steps to wipe out gains made during 18 days of protest.

"What has changed? ... What is the difference between Egypt in 2014 and Egypt in 2009, before the revolution? Nothing," said Ahmed Ezzedine, whose 21-year-old son was killed by gunfire at the time of the protests in 2011.

"If Hosni Mubarak and... the aides are innocent of these charges against them, then who killed him? Will they say the Brotherhood did it or that UFOs came from space and killed the Egyptian people and flew away?"

Sisi, who has since won a presidential election, cracked down hard on Morsi and his Muslim Brotherhood. Hundreds of Morsi's followers were gunned down in the streets when police cleared protest camps in Cairo last year. Authorities have jailed thousands of Brotherhood supporters, sentencing hundreds to death in mass trials that have drawn international criticism.

Secular activists, including some who opposed Brotherhood influence and welcomed the army's intervention, now also find themselves on the wrong side of Egypt's new rulers.

Dozens face trial for violating a protest law that was passed last year and effectively prevents Egyptians from repeating the millions-strong rallies that overcame decades of fear and helped unseat two presidents in three years.

"The Mubarak verdict is... the strongest possible message from the state that the revolution has been overturned," said British-Egyptian filmmaker and activist Omar Robert Hamilton.

Meanwhile, Mubarak-era figures are steadily being freed, while new laws limit the scope for dissent. A draft law lists a litany of offences from harming national unity to disrupting public order as grounds to designate an organization as terrorist.

Another proposal curbs media coverage of the armed forces, the most powerful force in a country ruled almost exclusively by military men for the past six decades.

Since 2011, at least 10 Mubarak-era politicians, including his Prime Minister Ahmed Nazif, have been freed from jail.
Several politicians who were in Mubarak's last cabinet returned under Sisi.

They include Fayza Abul Naga, recently appointed Sisi's national security adviser, who was a minister under Mubarak and the military council that ruled in the immediate aftermath of the revolt, when she spearheaded a crackdown on non-governmental organizations.

Prime Minister Ibrahim Mehleb was a senior official in Mubarak's now-defunct National Democratic Party. Mohamed Tohamy, a senior security officer under Mubarak, is now intelligence chief.
Yet many Egyptians crave stability above all else. Exhausted by seemingly endless turmoil that has battered the economy, many no longer care what happens to Mubarak.

Egyptian media has echoed those sentiments. Some channels even suggest that it was Islamists who killed the protesters, though the Brotherhood was part of the opposition at the time.

Stuck in traffic caused by the closure of Tahrir Square the day after two people were killed in protests against the Mubarak verdict, one taxi driver remarked: "Yes, he stole, but Mubarak is gone and we need Sisi, we need stability. We need to look forward. We can't keep looking back."

The government has declined to comment on the verdict but Sisi has ordered a review of compensation for victims.

Though it disappointed victims and dissidents, the Mubarak ruling came as little surprise. Activists said they had always wanted Mubarak to be tried in a special court rather than by a judiciary that they say is not equipped to hold to account leaders who embodied the system for so long.

Saturday's ruling is open to appeal which means Mubarak could be retried for a third and final time.

Khaled Dawoud, spokesman for the opposition Destour Party, said new charges were being drafted to ensure Mubarak faces justice.
"We have very little hope... but we have no option except to keep pressing," he said. "Without justice there cannot be stability."

Ezzedine, the father of the dead son, said the powerful and rich ruling class saw no need for justice for those who died in 2011. "Because they are killing the poor, it's no problem. Like they are just a few... animals," he says. "Egypt is 90 million people so if 500 or 600 or 1000 die then it is not important."