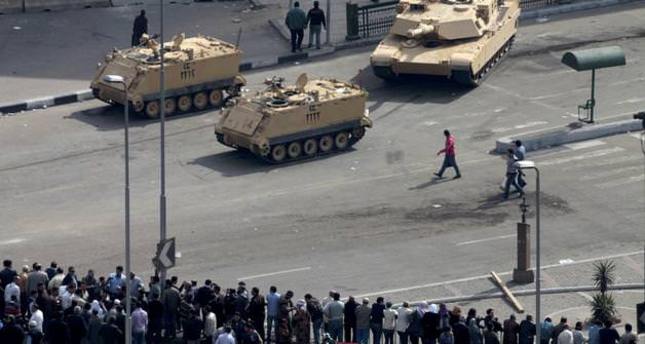 Barbed wire fences have been erected at entry points of the iconic square, which was the epicenter of a popular revolution that ousted Mubarak in 2011.

Armored vehicles have also been deployed around the square and near the state television building.

Friday's rallies were called by the main support bloc of ousted president Mohammed Morsi and a handful of youth-led protest groups to protest a court ruling to drop murder charges against Mubarak, his former interior minister and six former security officials.

The men had been charged with conspiring to kill unarmed protesters during the 2011 uprising.

Following Saturday's court ruling, three demonstrators were killed near Tahrir Square - which was blocked to traffic - after security forces violently dispersed a protest by hundreds of Egyptians who rejected the court decision, which Egypt's prosecutor-general has since appealed.
Saturday's ruling exonerating Mubarak angered many Egyptians, with some relatives of slain protesters taking to the streets to protest the autocrat's acquittal and demand "retribution."

Meanwhile, Egypt's Independence Party has suspended its membership in the National Alliance for the Defense of Legitimacy, ousted president Mohamed Morsi's main support bloc, shortly after the Salafist Front withdrew from the alliance. The alliance, which consists of several Islamist parties, was established in the wake of last year's army ouster of Morsi – the Muslim Brotherhood leader who, in 2012, won Egypt's first free presidential poll.

Right after the ouster of Morsi by the military, President Abdel-Fatah el-Sissi had declared that he would stand for the presidential election with the aim of restoring stability that cost dozens of lives in Egypt after four days of mass revolt amounting to millions filling up the streets of Egypt. A coalition led by the Egyptian army chief General el-Sissi had overthrown the Muslim Brotherhood government of Morsi, removed him from power and suspended the Egyptian constitution in July 2013. The Arab Spring first broke out as thousands of people took over Tahrir Square demanding freedom and social justice, ending Mubarak's long rule in 2011. Since then, Egypt has faced continuing political turmoil that has brought chaos into the daily lives of Egyptians.