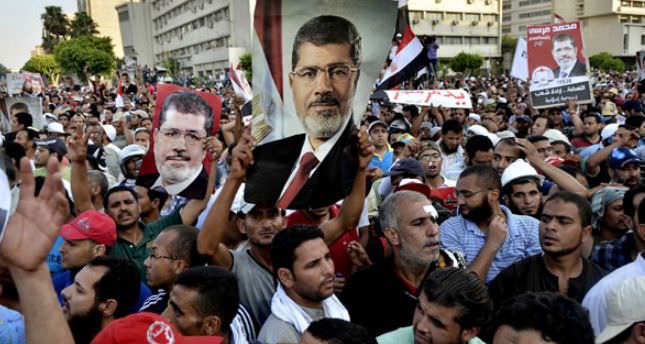 Egypt's first democratically elected president, Mohammed Morsi, spoke for the first time in court since his detention. Following the military coup that took place on July 3 last year, the former president was kidnapped at an undisclosed location, leaving many questions about his whereabouts. Recent recordings of top officials, which could be decisive in Morsi's release, were leaked Thursday evening.

The recording was of a phone conversation which took place between top army officials, Gen. Mamdouh Shahin, legal advisor to the Supreme Council of the Armed Forces (SCAF) in Egypt, and Gen. Abbas Kamil, El-Sisi's office manager, with Shahin telling Kamil that something needed to be done to ensure that Morsi's case would not collapse.

Morsi was being held illegally at a military navy base for several months before he was transferred to prison. According to Egyptian law, under no circumstances is it legal to detain a civilian inside a military base for any period of time. At that time, Morsi should have been held at an interior ministry facility, since he was to stand trial in front of a civilian court.

"They will appeal on the grounds of Morsi's detention location. His detention will be declared void, and he will be released," leaked one of the recordings. During the phone call, the officials discussed different ways to cover up the detention and fabricate the information released regarding his detention.

The plan was to change the external and internal appearance of navy buildings, in order to make them look more like a 100-year-old state prison, and to give it legal status as a detention center. The plot would come with falsified records to "prove" that inmates were indeed held at this location at the time Morsi was present. Simply "placing a sign," as the recording suggests, would change the name of the building so that it appears as legitimate as possible.

Everything did eventually go according to plan, as revealed in another recording, which exposed Shahin telling Kamil that the "mission [was] accomplished perfectly."

When Shahin speculated about whether this act could land them in jail, Kamil responded: "No, we shall never allow the sons of dogs [Muslim] Brotherhood to have another go at us."

After reports of the recording snowballed across various channels in Egypt and the world, social media exploded with questions asking who was responsible for the leak, why was it released after more than a year, and what it might mean for Morsi. Many Egyptians have yet to hear about the exposure of the leak, since Egyptian-owned media does not portray it as a fabrication of the military. Rather, if the media does discuss the topic, it's depicted as a falsification concocted by the Muslim Brotherhood, Morsi's political party which was labeled a terrorist group by the Egyptian cabinet.

Although the Egyptian military made no official statement, the Egyptian news outlet, Al-Ahram reported a statement made by the general prosecution, saying that efforts "to detect those who were involved in fabricating the recordings" are underway. The statement goes on to say that the Muslim Brotherhood have been "fabricating audio and video [recordings] using advanced technology" due to the "state of despair among their leaders." Investigations into the source of the recordings have been launched.

Meanwhile, Arabi 21, an online newspaper in Egypt, secured two Google Earth images of the location where Morsi was held captive. The first photo of the site taken on Feb. 5, 2014, confirms that it existed within the military unit near the Military Academy. The second picture, taken a month later on March 21, shows all the changes that the military unit underwent. The site where Morsi was held became an independent building outside the borders of the wall of the military unit, with a road leading to it from the main street, to further display it as a public prison.

More evidence came to light, as over a year ago, Egyptian Interior Minister Muhammad Ibrahim said in a broadcast interview, that on July 3, Morsi was not in a prison, but "elsewhere."

In court on Saturday, Morsi revealed that he was held at the headquarters of the Republican Guards after the coup, but was transferred on July 5. Morsi said he boarded a plane, and stopped in Ataqa Mountain for a few minutes. "Then we headed towards Fayid Airport where we spent half an hour before going to Alexandria," he said. "I knew that I was at the headquarters of the special amphibian forces. I was detained there from July 5 to Nov. 4."

After only one year in office, Morsi was ousted by former Gen. Abdel Fattah El-Sissi, Egypt's current president, who led the military coup, after three days of opposition protests. Those that understood the essence of democracy protested in anger in Rab'aa Square in Cairo for six weeks. The sit-in in Rab'aa was then dispelled on Aug. 14 last year by the military in the most serious incident of unlawful mass killings in modern Egyptian history, according to Human Rights Watch.

Anyone seen to support the symbol of Rab'aa is detained, and anyone who speaks against the coup is seen as a threat to Egypt.