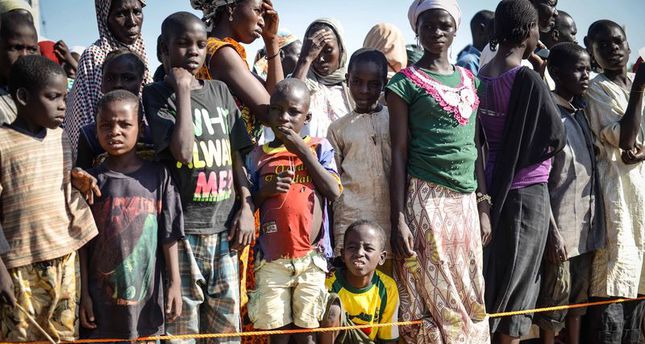 by AA Dec 18, 2014 12:00 am
Boko Haram militants have reportedly abducted over 200 people, including several women, from Bintiri village in Nigeria's northeastern Borno state.

"The militants invaded the village and took around 200 people, including women and able-bodied men," Jubrin Gunda, a spokesman for the civilian Joint Task Force, an influential local vigilante group, told Anadolu Agency by phone on Thursday.

He said the incident had been reported to the provincial security authorities.

"[Forced] conscription of men is clearly a desperate bid by the militants to shore up their fighting force, which we know has been depleted in recent months," said Gunda.

More than 200 schoolgirls remain in the hands of Boko Haram since they were abducted from their dormitories in Borno State's town of Chibok in mid-April.

Nigeria continues to battle a five-year insurgency in the country's volatile northeast.

An emboldened Boko Haram recently stepped up its militant activity, seizing several areas across Adamawa, Borno and Yobe - the three states worst hit by the insurgency - declaring captured territories to be part of a self-styled "Islamic caliphate."

The group has also recently resorted to using suicide bombers and planting explosives.

In November alone, Nigerian Security Tracker, an NGO, estimated that more than 200 people had been killed in suicide attacks and bombings - all linked to Boko Haram - across the country's north.

Borno State Governor Kashim Shettima recently said that, this year alone, more than 3,000 people had been killed and over two million displaced in Borno due to the insurgency.

Outlawed in Nigeria, Turkey and the United States, Boko Haram first emerged in the early 2000s preaching against government misrule and corruption.

It became violent after the death of its leader in 2009 while in police custody.