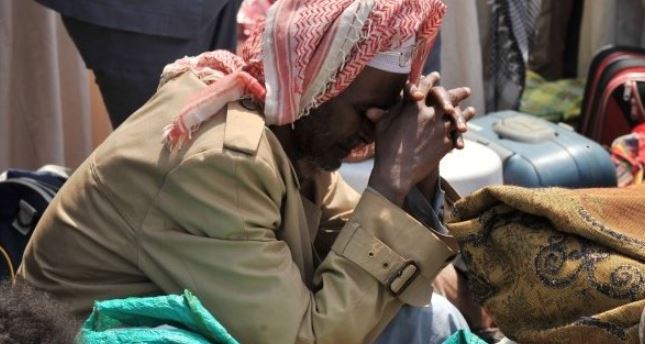 As the Muslim population in the Central African Republic continues to live in deplorable conditions, Human Rights Watch accused United Nations peacekeepers of using force to stop hundreds of Muslims from leaving the country to seek safety

An estimated 1,750 Muslims residents living in western parts of the Central African Republic (CAR) are trapped in enclaves, the international human rights organization said on Monday. Human Rights Watch (HRW) underscored the appalling situation of the trapped Muslims living in poor conditions, while saying that the United Nations peacekeepers and the interim government of CAR are preventing Muslims trapped in enclaves from leaving the country. The U.N. also provides no security assistance for Muslims living in displacement camps despite the fact that its sole mission is to maintain peace and security in the displacement camps or help Muslims seeking shelter in neighboring countries. HRW warned the U.N. of not being complicit in preventing Muslims from leaving to seek safety, leaving them in a dangerous situation.

"Those trapped in some of the enclaves face a grim choice: leave and face possible attack from anti-balaka fighters, or stay and die from hunger and disease," said Lewis Mudge, Africa researcher at Human Rights Watch. "While there are good reasons to ensure that the country's Muslim population does not diminish further, under the current circumstances, the government's policy of no evacuations is absolutely indefensible," he added.

Due to brutal attacks by Christian and animist anti-Balaka militias toward Muslims in late 2013 and early 2014, many muslims want to flee the country. As sectarian violence increases, many Muslims' lives have been threatened by anti-Balaka fighters as no international organization provides them with full protection and security.

"We want only to go to Cameroon. I have a son there.… We have tried to leave with our things many times, but the answer from MINUSCA is always no. We have tried at least 12 times to leave, but each time they pulled me off the trucks," a 55-year-old woman from southwestern town of Mbaïki told HRW.

In the Yaloké enclave where 509 ethnic Peuhl Muslims are housed in government buildings in the town center in deplorable conditions, the U.N. peacekeepers have repeatedly used force to stop Muslims from leaving, the HRW reported. "Using force to keep threatened Muslims in the Yaloké enclave from fleeing to safety is contrary to everything the U.N. stands for," Mudge said. "U.N. peacekeepers shouldn't play any part in a government policy that violates the rights of Muslims to seek safety and condemns them to deadly conditions in the enclaves," he stated stressing the collaboration between the United Nations peacekeepers and the transitional government of CAR.

Since the transitional government's decision to halt evacuations of Muslims, U.N. officials and African Union (AU) officials have stopped organizing the evacuation of Muslims. HRW reports that an AU official "openly threaten[ed] Peuhl [Muslims], vowing to shoot anyone who tried to board a convoy."

Despite the presence of some 8,000 U.N. and 2,000 French peacekeepers in CAR, the ongoing chaos has led thousands of Muslims to be killed or to be displaced. After the mostly Muslim Seleka rebels seized power, CAR has been in acute crisis since early 2013. Since then, sectarian violence has been escalating in central and eastern parts of the country, as the anti-balaka fighters started to launch attacks against the Seleka.