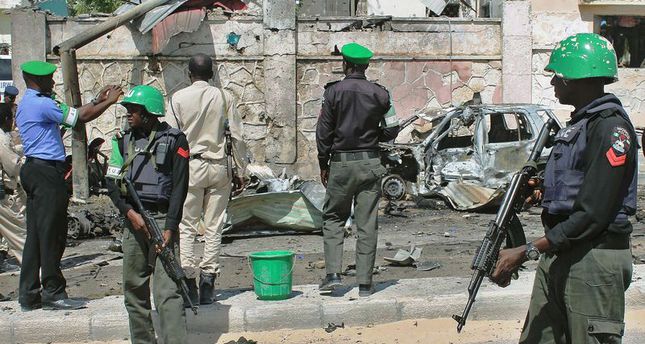 by AA Dec 25, 2014 12:00 am
Three African peacekeepers were killed on Thursday along with a civilian and five gunmen in an attack by the Al-Qaeda-linked militant movement Al-Shabaab on a fortified African Union Mission in Somalia (AMISOM) base in capital Mogadishu.

"During the gun fight, three AMISOM soldiers and a civilian contractor unfortunately lost their lives," AMISOM said in a statement, following the attack.

"The terrorists - some of them disguised in Somali army uniforms - breached the Halane base camp around lunch time and attempted to gain access into critical infrastructure," it added.

It said five militants were killed during the attempt, while three others captured.

The five deaths bring total fatalities from the attack up to nine.

AMISOM said its troops had regained control of the Halane base camp and restored normalcy.

"All personnel in the base camp are safe and secure," it added in the statement.

AMISOM head, Maman Sidikou, meanwhile, condemned the attack, but applauded the "swift response" made to it by the peacekeepers.

He vowed to maintain the fight against Al-Shabaab to the end with no rest.

The attack targeted a facility frequented by Ugandan peacekeepers, where a Christmas party was underway.

Somalia has remained in the grip of on-again, off-again violence since the outbreak of civil war in 1991.

Earlier this year, Somalia appeared to inch closer to stability after government troops and AU forces-deployed in the country since 2007-drove Al-Shabaab from most of its strongholds.
Last Update: Dec 26, 2014 11:20 am
RELATED TOPICS