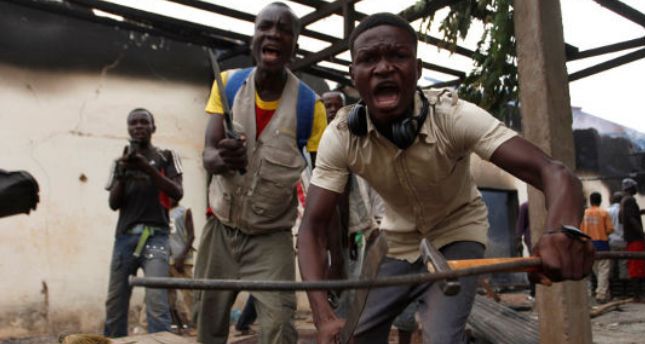 by Daily Sabah Dec 25, 2014 12:00 am
The United Nations Refugee Agency (UNHCR) has voiced its concern for the more than 500 members of a Muslim minority group that are trapped in an enclave in the Central African Republic (CAR). In the Yaloké enclave, 509 ethnic Peuhl Muslims are reportedly housed in government buildings in the town center, living in deplorable conditions. The United Nations peacekeeping forces have neither allowed them to flee the country nor provided them with security and protection. Due to brutal attacks toward Muslims by Christian and animist anti-Balaka militants in late 2013 and early 2014, many Muslims want to flee the country. As sectarian violence increases, the lives of many Muslims continue to be threatened by anti-Balaka fighters, with no international organization providing them with full protection and security.

"Despite the presence of international forces, the group at Yaloké, some 200 kilometers northwest of the capital Bangui, is still subject to recurrent threats, verbal and physical aggression and looting by anti-Balaka militias," UNHCR spokesman Adrian Edwards told journalists in Geneva. "Urgent humanitarian assistance is needed along with help in relocating them to safer places, either inside the Central African Republic or to neighboring countries."

The UNHCR revealed the dire humanitarian situation many Muslims in the enclave have been facing, saying, "More than 90 percent of the group members have expressed their desire to seek refuge in neighboring countries, such as Cameroon and Chad." Apart from the insecurity, the group has been suffering from malnourishment, malaria and tuberculosis, according to some reports.

The U.K.-based human rights organization, Human Rights Watch (HRW), underscored the appalling situation of the trapped Muslims living in poor conditions, while saying that the United Nations peacekeepers and the interim government in CAR are preventing Muslims trapped in the Yaloké enclave from leaving the country. The UN has provided no security assistance for Muslims living in displacement camps despite the fact that its sole mission is to maintain peace and security in the displacement camps or help Muslims seeking shelter in neighboring countries. The HRW accused the U.N. of being complicit in preventing Muslims from leaving to seek safety, leaving them in a dangerous situation.

Despite the presence of some 8,000 U.N. and 2,000 French peacekeepers in CAR, the ongoing chaos has led to the widespread killings of Muslims. The ones that have survived have been placed in camps where there is no way out. After the mostly Muslim Seleka rebels seized power early in 2013, CAR has been in a state of crisis. Since then, sectarian violence has been escalating in central and eastern parts of the country, as the anti-Balaka fighters started to launch attacks against the Seleka.