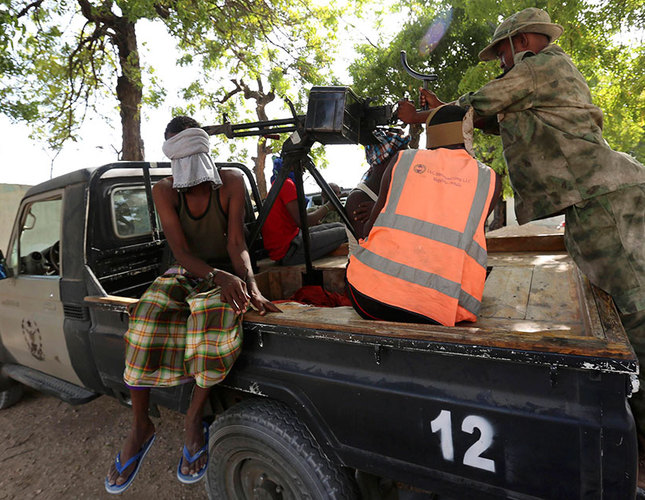 A blind-folded suspect is detained by Somalia security forces after attackers from the militant group Al-Shabaab invaded the African Union's Halane base on the edge of the Mogadishu International Airport on December 26, 2014 | Reuters
by AA Dec 27, 2014 12:00 am
Somali government forces have captured top Al-Shabaab leader Zakariya Ismail Hersi near Kenyan border, the government announced Saturday.

"Zakariya was arrested earlier today in El Wak Gedo. He is at the moment detained by the Somali national army in Gedo region," Interior Ministry official Mohamed Osman said.

Hersi was Al-Shabaab's Intelligence Chief, who had a bounty of $3 million on his head.

He had fallen with slain Al-Shabaab leader Ahmed Godane, who had been killed in a U.S. airstrike in September.

The militant leader is expected to be flown to Mogadishu for interrogation, according to Osman.

Somalia has remained in the grip of on-again, off-again violence since the outbreak of civil war in 1991.

Earlier this year, fractious Somalia appeared to inch closer to stability after government troops and African Union forces, which were deployed in the country since 2007, drove Al-Shabaab from most of its strongholds.