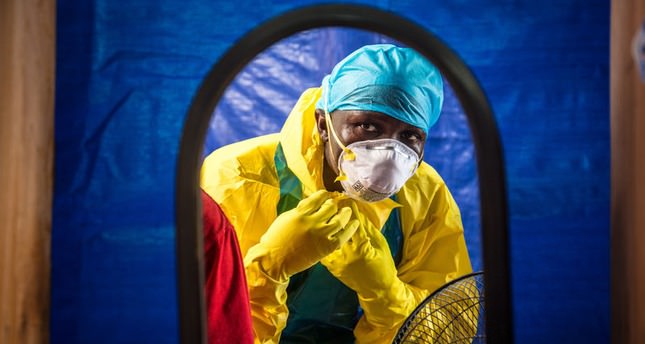 by AA Jan 03, 2015 12:00 am
Somalia denied reports on Saturday about registering its first deadly Ebola virus infection, a short time after local media had claimed that a man from Buulo Sharey town had contacted the virus.

"We acted quickly and decisively to isolate the alleged victims as soon as we heard the rumors," Somali Health Minister Ali Mohamed Mahamud said.

He added in a press briefing in the Somali capital that the man was identified as Abdulkadir Jinow Barow.

He said the man's family had also been isolated.

"It very quickly became apparent that the man did not have the Ebola virus," the minister said.

He added that he was nonetheless moved to Mogadishu as a precautionary measure and put through a rigorous series of tests by Health Ministry doctors.

The minister added that the man was already cleared by the Health Ministry.

"We can state categorically that there has been no outbreak of Ebola in Somalia," Mahamud said.

Barow, who attended the press conference to substantiate the remarks of the minister, said he had returned from Guinea in late December and gone through all tests in the countries he had passed through before entering Somalia

"I was given a clean bill of health at each stage of my return," Barow told the media. "So I am very confused and upset by the rumor that I was carrying the Ebola virus."

The Somalia government, meanwhile, said that it would investigate the rumor, vowing to bring to account those who stood behind it.

In recent months, Ebola - a contagious disease for which there is no known treatment or cure-has killed 7,588 people, mostly in West Africa, according to the World Health Organization.

In Liberia alone, the deadly virus has claimed a total of 3,384 lives.

Reports of new Ebola infections, however, have fallen drastically since November, with only four of Liberia's 15 counties still reporting fresh cases.

Ebola fears in Somalia had recently been behind the decision of Sierra Leone to withdraw its peacekeeping troops from it.