No access to towns where Boko Haram killed hundreds 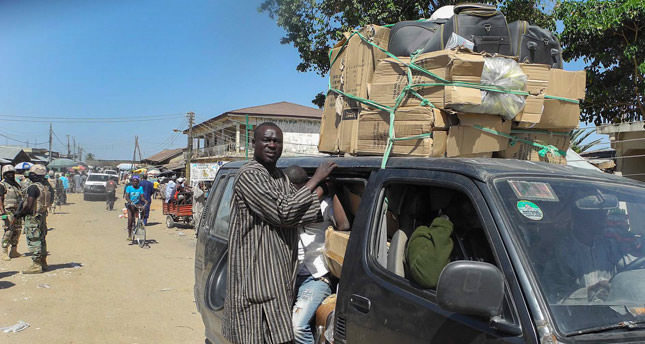 Satellite images of the towns where Boko Haram killed hundreds of people were released. The images revealed that thousands of homes were destroyed and damaged and it is still impossible to enter the area

Nigeria has been dragged into a major crisis as the extremist group in Nigeria, Boko Haram, has been continuing its violent acts unabated in the northern part of the country. The militants have carried out various deadly attacks in Nigeria's northeastern state of Borno and Baga last week. The group continues to kill hundreds as the death toll has reportedly reached 2,000. The town of Baga, located close to Nigeria's border with Chad, has been under attack as Boko Haram has been trying to seize power in northern Nigeria and bordering Cameroon and Chad to build an Islamic state. Despite the unprecedented massacre the international community was silent and besides a few condemnation Nigerians have been left to the hands of Boko Haram militants.

Amnesty International and Human Rights Watch Organization (HRW) yesterday released the satellite images of Baga where Boko Haram committed the massacre. Amnesty, HRW and other international groups were only able to enjoy the technology to have an idea about what really happened there as it was impossible to access the town. "Satellite images released by Amnesty International today provide indisputable and shocking evidence of the scale of last week's attack on the towns of Baga and Doron Baga by Boko Haram militants. Before and after images of two neighboring towns, Baga (160 kilometers from Maiduguri) and Doron Baga (also known as Doro Gowon, 2.5 km from Baga), taken on 2 and 7 January show the devastating effect of the attacks which left over 3,700 structures damaged or completely destroyed. Other nearby towns and villages were also attacked over this period," the Amnesty report said. "These detailed images show devastation of catastrophic proportions in two towns, one of which was almost wiped off the map in the space of four days. Of all Boko Haram assaults analyzed by Amnesty International, this is the largest and most destructive yet. It represents a deliberate attack on civilians whose homes, clinics and schools are now burnt out ruins," said Daniel Eyre, Nigeria researcher for Amnesty International. "In Baga, a densely populated town less than two square kilometers in size, approximately 620 structures were damaged or completely destroyed by fire. In Doron Baga more than 3,100 structures were damaged or destroyed by fire affecting most of the 4 square kilometer town. Many of the wooden fishing boats along the shoreline, visible in the images taken on the 2 January, are no longer present in the 7 January images tallying with eye witnesses' testimony that desperate residents fled by boat across Lake Chad," the report stated.

The residents of those towns who survived after the massacre had to flee to Chad. At least 12.000 people left their homes for Chad where there is no sufficient service to welcome them. A survivor told Amnesty "They killed so many people. I saw maybe around 100 killed at that time in Baga. I ran to the bush. As we were running, they were shooting and killing." Another woman said "I do not know how many but there were bodies everywhere we looked." Another witness described how Boko Haram was shooting indiscriminately killing even small children and a woman who was in labor. "Half of the baby boy is out and she died like this," he said. "Up until now, the isolation of the Baga combined with the fact that Boko Haram remains in control of the area has meant that it has been very difficult to verify what happened there. Residents have not been able to return to bury the dead, let alone count their number. But through these satellite images combined with graphic testimonies a picture of what is likely to be Boko Haram's deadliest attack ever is becoming clearer," said Daniel Eyre.

Also Boko Haram's mass abduction of more than 276 girls from a boarding school in Chibok in the northeastern state of Borno on April, 14 has led to great indignation and sparked world-wide protests. The girls remain captive and the group still threatens to keep up abductions mainly targeting girls. A few of the abducted girls who managed to escape told Human Rights Watch, an international human rights organization, that "they and many other female captives were subjected to abuses including forced marriage and rape." U.N. Secretary-General Ban Ki-moon made a personal appeal on Thursday to Boko Haram and all other extremist groups to free the hundreds of children they have abducted.

Nigeria, the most populous and the richest country in the region, one of the biggest oil producers in the world, have been suffering from violent attacks of the radical group. Boko Haram has been active since 2002 as their actions has become more apparent since 2009 after the death of their founding leader, Mohammed Yusuf. He first established a religious complex that included a mosque and a school where many poor families across Nigeria and from neighboring countries enrolled their children. The group has officially adopted the name "the Group of the People of Sunnah for Preaching and Struggle" but in the town of Maiduguri, where the group was formed, the residents dubbed it Boko Haram, loosely translated, "Western education is sinful," which would symbolize its strong opposition to anything Western corrupting Muslims.

Boko Haram has a strong emotional bond with Al-Qaeda regarding the similarities in the way they operate. The increasing number of young men living in northern Nigeria has affinity with the militant group and become radicalized. In a statement released by the group in last August, e leader of the Nigerian militant group, Abubakar Shekau, claimed that they will rule with a "caliphate" system and will take the northeastern town of Gwoza as its capital. "Thanks to Allah who gave victory to our brethren in [the town of] Gwoza and made it part of the Islamic Caliphate," Shekau said. The central government power is extremely weak to control the north as northern states are under strict control of powerful tribes which creates a suitable environment for militant group to spread across the country. The absence of political authority contributes the Nigerian youth nothing but to join radical groups as to leading more young man to increase their affinity with Boko Haram and to becoming more radicalized.