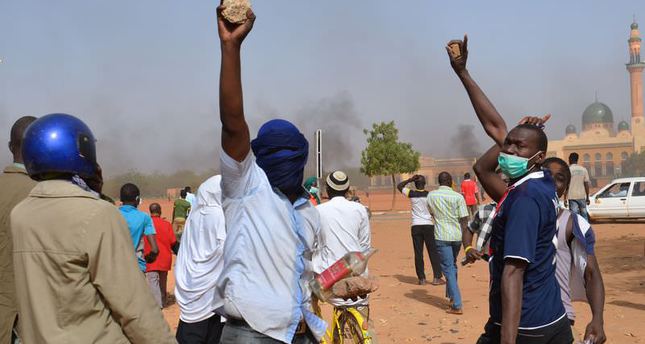 At least two churches were torched in Niger's capital on Saturday as protests raged on against the publication of a Prophet Mohammed cartoon by the French weekly Charlie Hebdo, an AFP correspondent on the scene reported.

Around 100 helmeted riot police stood in front of the Niamey cathedral at midday, protecting it from a crowd of stone-throwing youths. Earlier, police fired tear gas to disperse some 1,000 youths in front of the city's grand mosque and AFP witnessed protesters in several parts of the city armed with iron bars and clubs.

"Be very cautious, avoid going out," the embassy said on its website.

Saturday's protest came a day after a policeman and three civilians were killed and 45 injured in protests against Charlie Hebdo in Niger's second city of Zinder, which saw three churches ransacked and the French cultural centre burned down.

Thousands of Muslims demonstrated across the world on Friday, venting fury over the new Prophet Mohammed cartoon that Charlie Hebdo published in the wake of Islamist attacks on its offices and elsewhere in Paris last week.

Many Muslims see any depiction of Islam's prophet as offensive, while many Western governments support Charlie Hebdo's position that publishing the cartoons is an exercise in freedom of expression.

The satirical weekly has repeatedly published cartoons of Mohammed over the years and its latest issue, released on Wednesday, features a cartoon of Mohammed on its cover holding a "Je Suis Charlie" (I am Charlie) sign under the headline "All is forgiven".

It came a week after attacks by three gunmen on its offices, a kosher supermarket and a policewoman left 17 people dead in and around Paris over three days, in raids that deeply shocked the country and sparked an outpouring of international support.