Nigerians made homeless by Boko Haram ahead of presidential election 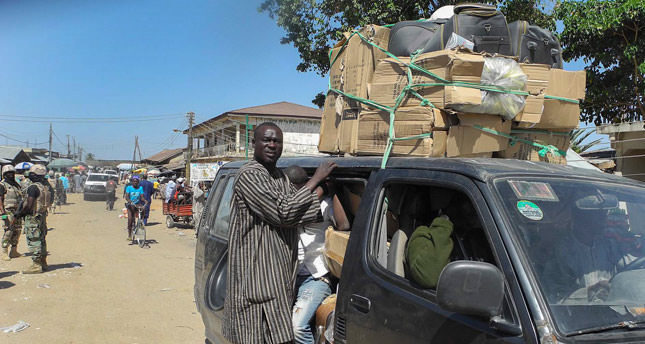 by Jan 17, 2015 12:00 am
The militant group Boko Haram has stepped up attacks in the region as Nigeria, Africa's biggest economy, prepares for a crucial February 14 presidential election while leaving many Nigerians homeless. Nigeria, Cameroon, Chad and Niger, the four nations in the region immediately threatened by Boko Haram was also called by the United Nations to agree on a command structure and strategy for a regional force to defeat the militants.

The electoral commission says it is rushing to distribute voter ID cards to the 1.5 million people who have been displaced, according to an Oxfam estimate, by the insurgents fighting for an Islamic state in religiously mixed Nigeria. But, for many voters the idea of going back to their home constituencies, as they legally must in order to cast their ballots, is too harrowing to contemplate.

President Goodluck Jonathan faces ex-military ruler Muhammadu Buhari in the Feb. 14 election, and there are grave doubts over whether voting can happen in swathes of the northeast overrun by rebels. As they are mostly opposition strongholds, Buhari stands to lose out the most.

The first time Boko Haram attacked Daniel Dunya's village, dozens of heavily armed men stole all the cattle and kidnapped several women. The second time they burned down churches and many houses. By the time they came back for a third go, abducting girls and killing the men, he was ready to leave.

"Most of my documents have been lost, including my voter's card, because I was running away," he told Reuters at Makholi displaced persons camp in Adamawa state, where chickens, goats and lizards darted among piles of trash.

Dunya's home lies near the town of Gwoza, in mountains controlled by Boko Haram near the Cameroon border, an area over which the militants have declared an Islamic state.

The independent electoral commission (INEC) hopes it can find a away around the law, which parliament at the end of last year ruled out modifying. Giving out ID cards in refugee camps was itself a departure from the normal rules.

Nearly half of all registered voters nationwide have yet to receive new voter identification cards, the commission said on Tuesday, raising questions about preparations for the vote with just a month to go.

On Monday, INEC set up tents on a large sandy field just inside the entrance of Modibbo Adama University of Technology in Yola to hand out voter cards for the insurgent-controlled area of Madagali. Each tent represented a different ward. For another insurgent-controlled area, Michika, five schools were designated for card retrieval. The hand-out will last until Saturday night.

To illustrate the size of the problem, in Adamawa state, five Boko Haram-controlled local authorities account for 356,680 voters.

Meanwhile, Chad will send a large number of troops to neighbouring Cameroon to help it fight increasing incursions from Boko Haram militants attacking from Nigeria. The announcement by the President of Cameroon, Paul Biya did not specify how many troops Chad will send, but comes a day after the Chadian government said it will actively help Cameroon fight Boko Haram militants.

Chad President Idriss Deby Itno "has decided to send a large contingent of Chadian armed forces to help the Cameroonian Armed Forces facing...repeated attacks from the Boko Haram terrorist sect," Biya said in the statement on the presidency's website.

Biya has called for international military help to fight the militant group that has seized swathes of northern Nigeria and is threatening neighbours who share borders with the northeastern zones occupied by the group.

Boko Haram, which aims to carve out an Islamist state in northern Nigeria, has stepped up attacks in the region as Nigeria, Africa's biggest economy, prepares for a crucial Feb. 14 presidential election.