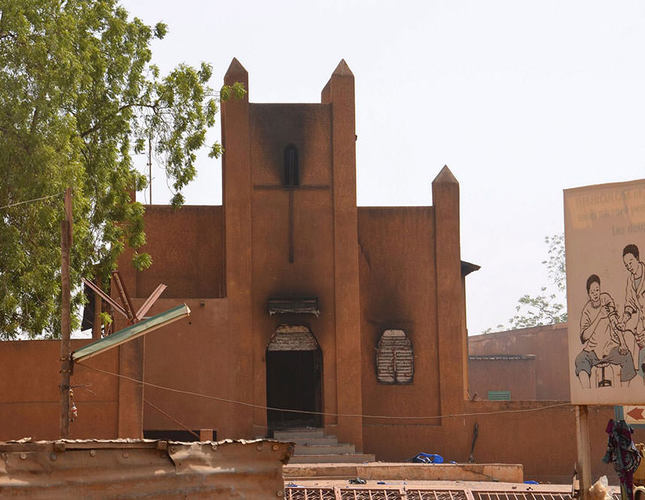 by Jan 19, 2015 12:00 am
Forty-five churches were torched over the weekend in Niger's capital during deadly protests over the publication of a Prophet Mohammed cartoon by the French satirical weekly Charlie Hebdo, police said on Monday.

The protests, which left five people dead and 128 people injured in Niamey, also saw a Christian school and orphanage set alight, Adily Toro, a spokesman for the national police, told a press conference.

Similar unrest sparked by the French satirical weekly, which was targeted by a bloody raid on January 7, saw five people killed in the southern city of Zinder, where 45 were wounded.

In the attack on Charlie Hebdo, gunmen slew 12 people, saying they were avenging previous publications of cartoons depicting the prophet. A week later staff defiantly produced a "survivors' issue" with a new cartoon, winning backing from vocal supporters of freedom of expression, but further provoking Muslims in a number of countries.

"The French flag was burned," Toro said, adding that 189 people, including two minors, were arrested by police. Demonstrators also pillaged and burned numerous premises, including five hotels and 36 bars.

On Sunday, some 300 protestors in Niamey defied a ban on further demonstrations, throwing stones at police who tear-gassed them. The governor of the capital, Hamidou Garba, said 90 people were arrested, while local media said those detained included opposition leaders.

Muslim elder Yaou Sonna on Saturday urged people to stop attacking Christians. "Don't forget that Islam is against violence," he said on state television. "I urge men and women, boys and girls to calm down."

Many Muslims, who form an overwhelming majority of Niger's population, see any depiction of Islam's prophet as offensive.