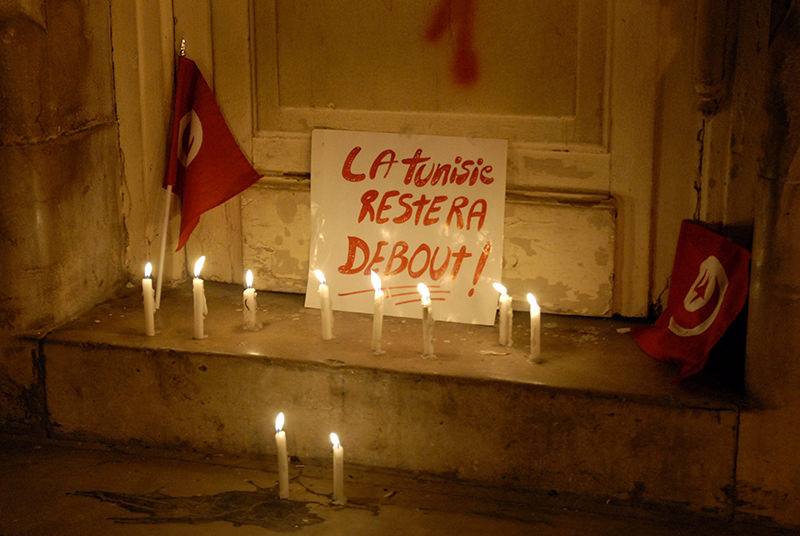 Tunisia, which has been promoted as a model for other conflict-torn Arab countries, was left shocked after an attack on a museum which left at least 23 people dead, mostly tourists. ISIS claimed responsibility for the deadly attack

The attack on Tunisia's National Bardo Museum, near the Parliament building on Wednesday that left at least 23 dead and dozens wounded, threatens the tiny country's fragile democracy that was gained after the disposal of autocrat Zine El-Abidine Ben Ali in 2011. 4 directly connected to museum attack arrested, 5 others also detained, Tunisian presidency said.

The Islamic State and al-Sham (ISIS) group issued a statement on Thursday claiming responsibility for the deadly attack on Tunisia's national museum in an online audio recording, describing the attack as a " invasion of one of the dens of infidels and vice in Muslim Tunisia."

"Wednesday's two attackers burst from a vehicle wielding assault rifles and began gunning down tourists climbing out of buses. The attackers then charged inside to take hostages before being killed in a firefight with security forces," Associated Press reported.

Tunisian Prime Minister Habib Essid, in an interview with France's RTL radio, said Tunisia was working with other countries to learn more about the attackers, identified as Yassine Laabidi and Hatem Khachnaoui. They were killed by security services in a raid. He said Laabidi had been flagged to intelligence, although not for "anything special." One of the gunmen who killed the tourists and others at a prominent Tunisian museum was known to intelligence services, the prime minister said Thursday. Health Minister Said Aidi said the death toll rose Thursday to 23 people, including 18 foreign tourists, with almost 50 people wounded. Five Tunisians were killed, including two attackers. Aidi said all the injuries came from bullet wounds, and that several victims were brought in without identity documents. Tunisian President Beji Caid Essebsi said "I want the Tunisian people to understand that we are in a merciless war against terrorism and that these savage minorities do not frighten us. We will fight them without mercy to our last breath. This new act of barbarity sounds an alarm. It announces that the world has changed," French Prime Minister Manuel Valls said.

On Tuesday, one day before the attack, Tunisian authorities said that they had dismantled a recruiting cell sending militants to fight in Libya and arrested dozens as part of a tighter security and border control policy to counter militants. Tunisia has voiced its concern over the rise of the extremist groups in Libya that have recently pledged allegiance to ISIS. "Security officers and the army arrested 10 terrorists trying to sneak into Libya to join the armed groups in Libya," the Interior Ministry said in a statement on Tuesday. Tunisians make up one of the largest groups of foreign fighters in Syria and Iraq, fighting along with the ISIS militants. Also, recently it was reported that dozens of Tunisians have joined the pro-ISIS militants in Libya. "More than 3,000 Tunisians have also left to join militants fighting in Syria and Iraq, and the government is concerned about the prospect of returning fighters carrying out attacks on their home soil," Reuters reported. The prime minister on Tuesday said that about 400 militants were arrested last month.

Despite the tension near the Libyan border due to the al-Qaida-inspired Salafi militants and assassination of prominent opposition figures last year, the country has remained on the path of democracy. Tunisia also arose as the only Arab country where power is shared between Islamists and secularists after the ruling Ennahda party accepted allying with secularists through adopting an unprecedented constitution last year. Therefore, political scientists and regional experts have been favoring Tunisia as a role-model for other Arab countries, who have been dragged into the chaos either under dictatorial rules or under the influence of extremist groups.

Prior to the revolution, Tunisia, despite having a Muslim population, was forcibly secularized under the dictatorship. Those who visited mosques frequently were followed by the police and arrested to investigate whether they were members of any anti-government movement. Female students were prohibited from attending universities unless they agreed to take off their headscarves. For a short time, the ancient regime attempted to ban headscarf wearing, even in the streets. The Ennahda leader and an influential scholar, Islamist Ghannouchi, had to live abroad, including in Paris and London. After the revolution, which started after a young Tunisian man, Mohammad Bouazizi, set fire to himself due to the deteriorating economic conditions and increasing unemployment, the country has started establishing a democratic system.

Tunisians recently voted in the first democratic presidential election since the revolution and the secular Essebsi won the presidential election. The government was formed under a coalition between Islamist and secular parties.
Last Update: Mar 20, 2015 9:28 pm
RELATED TOPICS