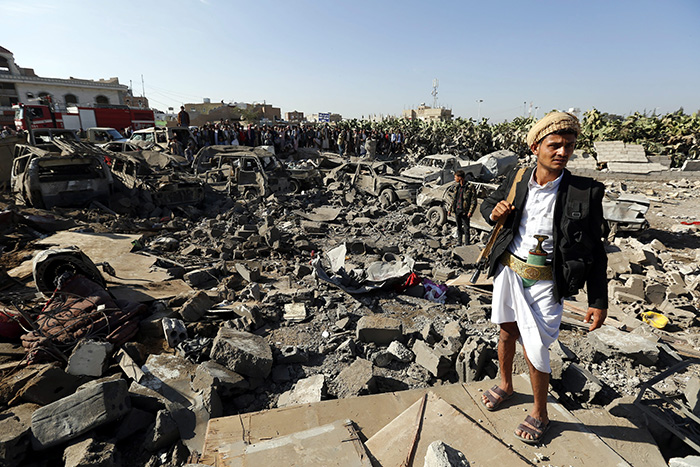 Saudi Arabia has launched a military operation in Yemen to stop the advance of Iranian-backed Shiite Houthi rebels, with the explicit support of several Arab and Western countries, including Egypt, which sent warships to Aden

Saudi Arabia has pounded targets of the Iran-backed Shiite Houthis, who have attempted to oust the Gulf-backed and internationally recognized President Abd-Rabbu Mansour Hadi. Several countries including Turkey, the U.S., the U.K., the tiny Gulf countries, Egypt, Pakistan and several other Muslim and Arab countries have pledged their support for the military intervention, while Iran has asked Riyadh to stop the aerial strikes immediately. However, the war is really considered to be between Riyadh and Tehran rather than the Shiite Houthis and Sunni Yemeni central government. "We will do whatever it takes in order to protect the legitimate government of Yemen from falling," Saudi Arabia's ambassador to the U.S., Adel al-Jubeir, told a news conference in Washington.

"Warplanes bombed the main airport and the nearby al Dulaimi military air base in the Houthi-held capital Sanaa," residents said, in an apparent attempt to weaken the Houthis' air power and ability to fire missiles. A Reuters witness said four or five houses near Sanaa airport have been damaged. Rescue workers put the death toll from the air strikes at 13, including a doctor who had been pulled from the rubble of a damaged clinic. Warplanes struck Houthi fighters near Yemen's border with Saudi Arabia," Reuters reported. Reuters also reported that "In Aden, a local official reported that fighters loyal to Hadi retook the airport, a day after it was captured by forces allied to the Houthis advancing on the city. The facility remains closed and flights are cancelled. Said Arabia also cancelled flights to its southern airports."

Riyadh-owned al-Arabiya TV reported that Saudi Arabia was contributing 100 warplanes to operation "Storm of Resolve," and more than 85 were provided by the United Arab Emirates, Qatar, Bahrain, Kuwait, Jordan, Morocco and Sudan. Jordan and Sudan said their forces were involved in the aerial operation. Egyptian naval and air forces were participating, with four naval ships en route to secure the Gulf of Aden. Pakistan was also considering a request to send ground forces. A Saudi official familiar with defense matters was quoted by Reuters as saying that "a land offensive might be needed to restore order." In a joint statement, five Gulf countries, Saudi Arabia, the United Arab Emirates, Bahrain, Qatar and Kuwait, said the operation "was in response to a request from Yemeni President Abd Rabbuh Mansour Hadi to protect Yemen from the aggression of Houthi militias." The statement accused the Houthis of being a "tool of foreign powers that seeks to harm the security and stability of Yemen."

Iran's Foreign Ministry asked for an immediate halt to the "aggression and air strikes" in Yemen, the semi-official Fars news agency reported. "Military actions in Yemen ... will further complicate the situation," Fars quoted Foreign Ministry spokeswoman Marzieh Afkham as saying. A senior Iranian official was quoted by Reuters as saying "Iran will use all possible political means to allay tension in Yemen. Military intervention is not an option for Tehran."

Turkey also expressed its support for the military intervention in Yemen against the rebels. "We support the military operation launched by a coalition force consisting of the countries in the region, led by the countries of the Gulf Cooperation Council against the Houthi movement upon the request of the legitimately elected President Hadi, about which Saudi Arabia informed Turkey in advance," the Turkish Foreign Ministry said in a statement on Thursday. The statement continued: "We believe that this operation will contribute to the prevention of the threat of civil war and chaos that has emerged and to the restoration of the legitimate state authority." Condemning the unilateral action by the Houthi militias, Turkey also called on the movement and its foreign supporters to cease "threatening peace and security" in Yemen and the region.

Before the airstrikes began, the president left the country for Oman en route to Egypt, where he will attend the Arab Summit, which will start on Saturday. "Hadi and a number of officials left Yemen, crossing the border to Oman before flying to Egypt's town of Sharm el-Sheikh to attend the Arab summit," Anadolu Agency reported. Contrasting information on Hadi's location was reported, as some sources refused the claims that he went to Oman, while some others claimed that he escaped from the Houthi aggression as a neighborhood near his residential compound was bombed on Wednesday.

Yemen's slide towards civil war has made the country a crucial front in mostly Sunni Saudi Arabia's rivalry with Shi'ite Iran, which Riyadh accuses of stirring up sectarian strife through its support for the Houthis. Sunni Arab monarchies around Yemen have condemned the Shi'ite Houthi takeover as a coup, and have mooted a military intervention in favor of Hadi in recent days.


The advance of the Iranian-allied Shi'ite Houthi group raises fears of the possible disintegration of the country. The capital Sanaa has been under Houthi rebel control since September last year. The country has been facing severe political instability after the takeover of the presidential palace by Houthi militants prompted President Abd Rabbuh Mansour Hadi to tender his resignation. The Yemeni President Hadi fled to the southern port city of Aden, where he has re-established his presidency. As the country continues to be dragged into civil war, the U.N. has started to hold mediated peace talks between Houthis and Hadi's government in a bid to bring peace and stability back to the country.

Yemen is also of crucial importance for the U.S., as the country is home to one of their worst enemies, al-Qaida's deadliest franchise, the AQAP, which has orchestrated numerous high-profile terrorist attacks, including claiming responsibility for the January 7 Charlie Hebdo massacre in Paris. Since 2002, the U.S. has been conducting counterterror strikes and operations against radical militants as part of U.S. national security policy. During the Obama administration, there have been 15 airstrikes and 107 drone strikes in Yemen as part of a "targeted-killing policy." The practices of the Obama administration raise serious laws-of-war concerns regarding the human cost of U.S security policy in Yemen.
Last Update: Mar 26, 2015 6:05 pm
RELATED TOPICS