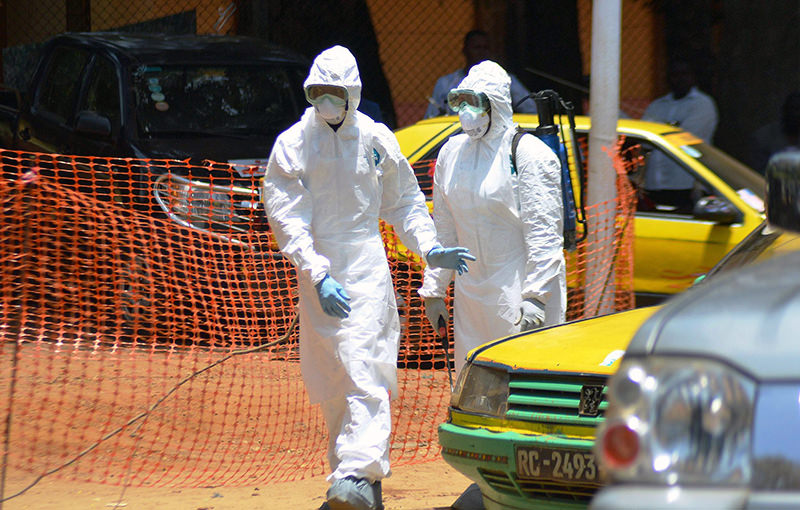 | Photo: Reuters
by Compiled from Wire Services Mar 28, 2015 12:00 am
As Sierra Leone starts a three-day lockdown as part of efforts to contain the Ebola virus, residents are divided over orders to stay home.

Guinea has deployed security forces to the country's southwest in response to reports that Sierra Leoneans are crossing the border to flee an Ebola lockdown intended to stamp out the deadly disease, an official said Saturday.

"I think it's very timely to get a lockdown again," Santigie Sankoh, a trader at the central market in the city of Makeni in the northern Bombali district, told The Anadolu Agency.

"We have almost defeated Ebola in Makeni, but now we are getting new cases again," he noted.

Makeni, a hotspot for Ebola, recently reported a cluster of cases in Rosanda village.

"We need to take these tough measures so we can finish Ebola," contended Santigie.

President Ernest Bai Koroma recently ordered the lockdown in a bid to finish the virus off once and for all.

"All Sierra Leoneans must stay home for three days," he said, expanding on a previous order for a lockdown in hot spots including capital Freetown and parts of the country's north.

People are expected to stay home from 6am on March 27 to 6pm on March 29, while trading activities will be halted countrywide.
Meanwhile, the Guinean deployment, led by the head of the national gendarmerie, was sent late Friday night to the town of Forecariah, said gendarmerie spokesman Mamadou Alpha Barry, adding that the area is "secure."

Residents reported tension in the region resulting from a large influx of Sierra Leoneans in the days leading up to the lockdown, which went into effect on Friday and ends Sunday.

"Why would they leave their country if they didn't have Ebola?" said Forecariah resident Mamadou Kolibe. "We are opposed to their arrival and that has caused a stir here."

In Guinea's border town of Pamelap, resident Iliassa Balde said security forces had to intervene to prevent clashes on Friday night and all residents were asked to stay in their homes.

The southwest region of Guinea borders northern districts of Sierra Leone that are focus areas for the lockdown operation.

Sierra Leone government spokesman Theo Nicol said the two countries had agreed to police the border so people with Ebola symptoms did not cross.

The region sees a lot of cross-border movement and "nobody should panic about it," Nicol said, adding that security forces had assured Sierra Leone's government that the border was being adequately monitored.

In Freetown, Sierra Leone's capital, officials reported that most people stayed in their homes on Friday and Saturday, with the exception of teams looking for possible cases and Muslims heading to mosques on Friday. The lockdown does not apply to people attending religious services.

Sierra Leone conducted a similar nationwide operation last September when transmission rates were much higher. Ebola has infected nearly 12,000 people in Sierra Leone, more than any other country, but the latest weekly total of 33 confirmed cases is the lowest since last June.