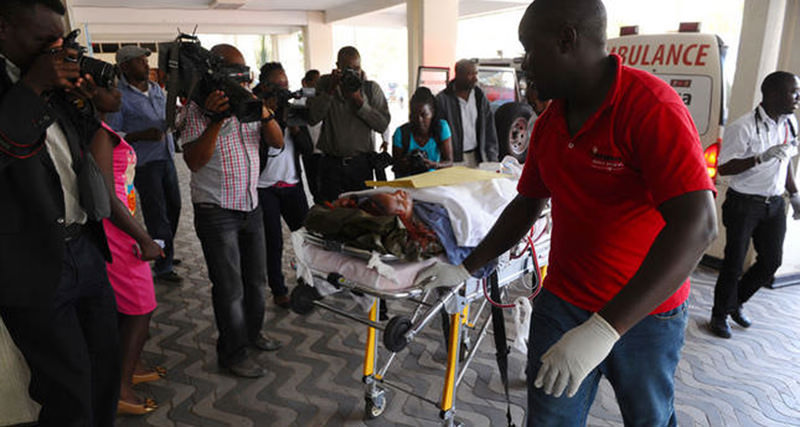 by French Press Agency - AFP Apr 02, 2015 12:00 am
At least 147 students were massacred when Somalia's Shebab extremist group attacked a Kenyan university on Thursday, the government said, after the deadliest attack in the country since US embassy bombings in 1998.

Hurling grenades and firing automatic rifles, the masked gunmen stormed the university in the northeastern town of Garissa as students were sleeping, shooting dead dozens before setting Muslims free and holding Christians and others hostage.

There are "147 fatalities confirmed in the Garissa attack," the national disaster operations centre said in a statement, confirming the seige was now over with all attackers dead.

"The operation at Garissa University College has ended, with all four terrorists killed," the centre said, after the attack which lasted some 16 hours from before dawn until well after dark.

At least 79 people were also wounded in the assault, which began when the first grenades were used before dawn to blast open the gates of the university, near the lawless border with war-torn Somalia.

In the final hour before darkness fell, Kenyan troops stormed the student dormitory where the gunmen were holed up as explosions and heavy gunfire rang out. Troops then continued to search the campus for any possible insurgents.

It was the worst attack in Kenya since the 1998 bombing of the US embassy in Nairobi by Al-Qaeda, when 213 people were killed by a huge truck bomb.


Thursday's attack was claimed by Al-Qaeda-linked Shebab fighters, the same insurgents who carried out the Westgate shopping mall massacre in Nairobi in September 2013, when four gunmen killed at least 67 people in a four-day siege.