At least 15 dead as gunmen attack university in Kenya 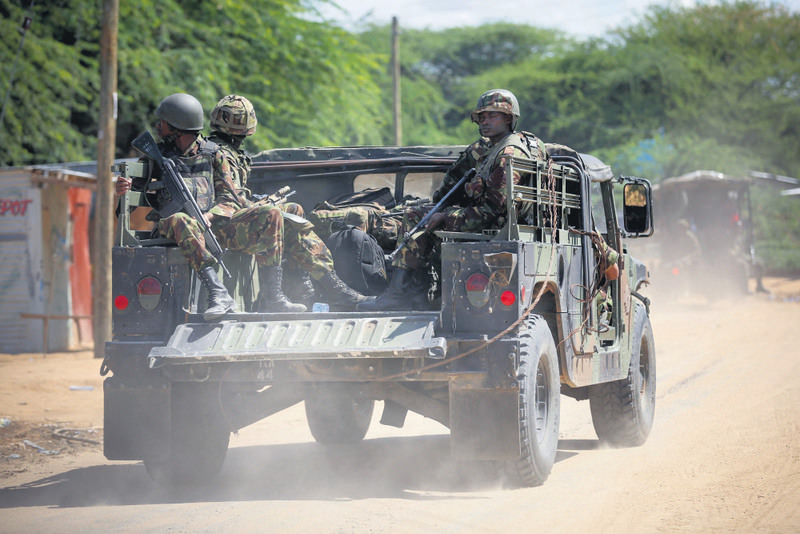 by Associated Press Apr 03, 2015 12:00 am
Al-Shabab gunmen attacked a college in northeast Kenya early Thursday, targeting Christians and killing at least 15 people and wounding 60 others, witnesses said. The president said it is now a hostage situation. Even as security forces cornered the gunmen in a dormitory at Garissa University College where they could be holding hostages, survivors described to The Associated Press a harrowing scene, where people were mercilessly gunned down and bullets whistled through the air as they ran for their lives. Collins Wetangula, the vice chairman of the student union, said he was preparing to take a shower when he heard gunshots coming from Tana dorm, which hosts both men and women, 150 meters (yards) away. The campus has six dorms and at least 887 students, he said. He said that when he heard the gunshots he locked himself and three roommates in their room. "All I could hear were footsteps and gunshots nobody was screaming because they thought this would lead the gunmen to know where they are," he said. "The gunmen were saying sisi ni al-Shabab (Swaihi for we are al-Shabab)," Wetangula said.

When the gunmen arrived at his dormitory he could hear them opening doors and asking if the people who had hidden inside whether they were Muslims or Christians. "If you were a Christian you were shot on the spot," he said. "With each blast of the gun I thought I was going to die." The gunmen started to shoot rapidly and it was as if there was an exchange of fire, he said. "The next thing, we saw people in military uniform through the window of the back of our rooms who identified themselves as the Kenyan military," Wetangula said. The soldiers took him and around 20 others to safety.

A spokesman for al-Shabab says it is responsible for the ongoing attack. Ali Mohamud Rage said in a radio broadcast that fighters from the group are conducting a "heavy" military operation inside the campus. Kenya's security forces are trying to dislodge the gunmen from at least one dorm. Kenyan President Uhuru Kenyatta said hostages have been taken. "I am saddened to inform the Nation that early today, terrorists attacked Garissa University College killed and wounded several people and have taken others hostage," he said in a speech to the nation. He said details would be forthcoming "in due course" from security officials. Michael Bwana, a 20-year-old student who fled the attack, said he and other survivors have been trying to call their trapped friends but their phones are switched off. Either the students turned off their phones for their own safety or the gunmen have seized the handsets, he said. "Most of the people still inside there are girls," Bwana said, referring to the student dormitory in which gunmen are believed to be holding an unknown number of students. One suspected extremist was arrested as he attempted to flee the scene, Interior Minister Joseph Nkaissery told a press conference in Nairobi. Augustine Alanga, a 21-year-old student, described a panicked scene as gunshots rang out outside their dormitory in the pre-dawn hours when most people were asleep. The shooting became more intense almost immediately, he told AP by phone. The heavy gunfire forced some students to stay indoors as others fled with gunmen firing at them. He said he saw at least five heavily armed, masked gunmen. "I am just now recovering from the pain as I injured myself while trying to escape. I was running barefoot," said Alanga, who was one of scores of students who managed to escape through barb-wire fencing. At the time the attack started, 5:30 a.m., morning prayers were underway at the university mosque, where students were not attacked, he said.

A mortuary attendant in the town of Garissa says at least 15 people have been killed and at some 60 were injured. The attendant saw the casualties arrive by ambulance. He spoke on condition of anonymity because he was not authorized to speak to the press. Some of the more serious wounded were being flown to Nairobi, the capital, authorities said. Local residents donated blood outside Garissa hospital in the shade of a tree.

The National Disaster Operations Center said on Twitter that three of four dorms have been evacuated, with the gunmen cornered in one dorm. No further details were immediately available and Kenya Defense Forces have surrounded the area, journalists said, impeding their access. Terrified students streamed out of buildings, some young men shirtless, as arriving police officers hunkered down, taking cover. The gunmen had opened fire at guards upon arriving, triggering a "fierce shootout" with police guarding student dorms, Kenya's National Police Service said in a written statement. Wetangula was among about 20 students who had been rescued by soldiers. One soldier instructed them to run at their command and dive when they told them to when they got outside, he said. "We started running and bullets were whizzing past our heads and the soldiers told us to dive," Wetangula said. He said the soldier told the students later that al-Shabab snipers were perched on a three story dormitory called the Elgon and were trying to shoot them. Police and military surrounded the buildings and were trying to secure the area, police officer Musa Yego told AP.
Last Update: Apr 03, 2015 2:12 am
RELATED TOPICS