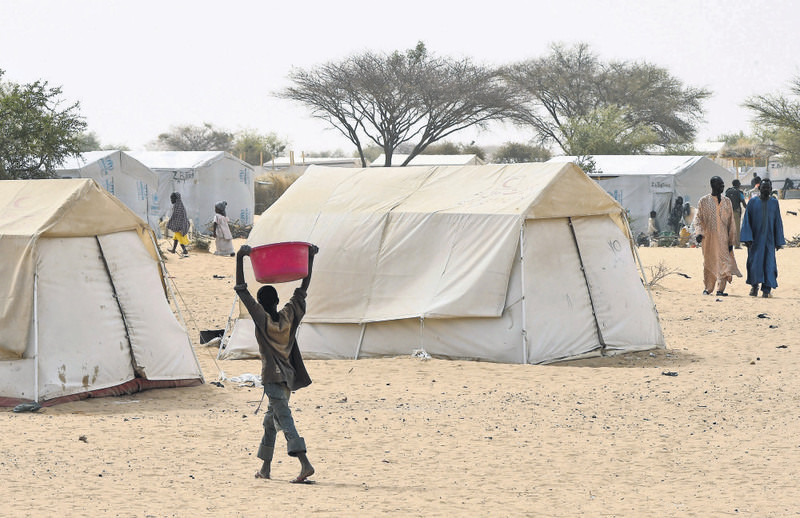 UNICEF reports that over 880,000 of the 1.5 million displaced Nigerians are child refugees dealing with a lack of access to education and clean water. Those who stay suffer from horrific abuse or abduction

On the first anniversary of the abduction of 276 schoolgirls by the violent militant group Boko Haram, the U.N.'s children's agency revealed the worsening humanitarian situation affecting mostly children in Nigeria, who have become "deliberate targets" and "weapons of war." The number of children who have been displaced due to violence carried out by Boko Haram has doubled with 880,000 Nigerian children refugees, UNICEF said in the report called "Missing childhood: the impact of armed conflict on children in Nigeria and beyond."

Many Nigerian children are either internally displaced inside Nigeria "with little access to humanitarian support, putting additional strains on already stretched health, education and social services" or have crossed into neighboring Cameroon, Chad and Niger to flee from extreme violence. "Nearly 2,400 separated and unaccompanied children are among a population of nearly 150,000 displaced persons," according to an assessment carried out by UNICEF conducted in 33 locations in Yobe and Borno states in northern Nigeria.

"The abduction of more than 200 girls in Chibok is only one of endless tragedies being replicated on an epic scale across Nigeria and the region," said Manuel Fontaine, UNICEF Regional Director for West and Central Africa. "Scores of girls and boys have gone missing in Nigeria – abducted, recruited by armed groups, attacked, used as weapons, or forced to flee violence. They have the right to get their childhoods back," he added. He also praised the new government led by Muhammadu Buhari, who "vowed to make securing your freedom a top priority and promised that the [Nigerian] government will not tolerate violence against women and girls," while criticizing the former president Goodluck Jonathan for an insufficient response to the kidnapping.

Boko Haram's mass abduction of more than 276 girls from a boarding school in Chibok in the northeastern state of Borno on April 14 has led to great indignation and sparked world-wide protests. The girls remain captive, and the group still threatens to keep up abductions mainly targeting girls. A few of the abducted girls who managed to escape told Human Rights Watch, an international human rights organization, that "they and many other female captives were subjected to abuses including forced marriage and rape."

Children, mostly girls, have been "deliberately targeted" by militants as girls "have been subjected to forced marriage, forcible religious conversion, physical and psychological abuse." They have also been coerced to becoming suicide bombers as a new strategy of Boko Haram, after abducting thousands of children over the past five years and using them as porters, slaves and fighters.

Those who have not been abducted by the militant group are not the lucky ones, as they have to deal with worsening life conditions such as lack of access to education. The ones who stay have no access to school, while others internally displaced suffer from overcrowded schools. Nearly 60 percent of children in the north of the country do not have access to education, as "more than 300 schools have been severely damaged or destroyed. At least 196 teachers were killed in the period between January 2012 and December 2014." According to the statistics from UNESCO, "the number of children of primary age not attending school in Nigeria has increased from 8 million in 2007 to 10.5 million."

The report notes that more than 1.5 million Nigerians, mostly living in the northeast of the country have been forced to run for their lives. Among them, 1.2 million have been internally displaced and around 200,000 have taken shelter in the neighboring countries. The report states that Cameroon has the largest refugee and internally displaced population with 146,000. This number is followed by Niger with 100,000 and Chad with 41,300. Yet, these staggering numbers are likely to increase further as Boko Haram's deadliest assault continues.

Since Boko Haram started to launch its deadly assault in 2009, at least 15,000 people have been killed in violent attacks on civilian towns. More than 7,300 were killed in 2014 alone. Boko Haram's brutal attacks have increased in recent months,with at least 1,000 civilians having been killed since the beginning of this year, underscoring gross violation of human rights by Boko Haram according to the U.N. figures. Due to increasing militant group attacks, Nigeria became the fourth deadliest country in the world, according to the 2014 figures released by a new think tank, Project for the Study of the 21st Century (PS21). Compared to the previous year, the number of deaths almost tripled after the conflict with militant group Boko Haram intensified in the northern part of the country. The growing radicalization in the northern states is seen as a crucial threat to both the future of Nigeria and global security. There is growing concern that the pattern of radicalization could spread to other areas in the region.
Last Update: Apr 14, 2015 11:01 am
RELATED TOPICS