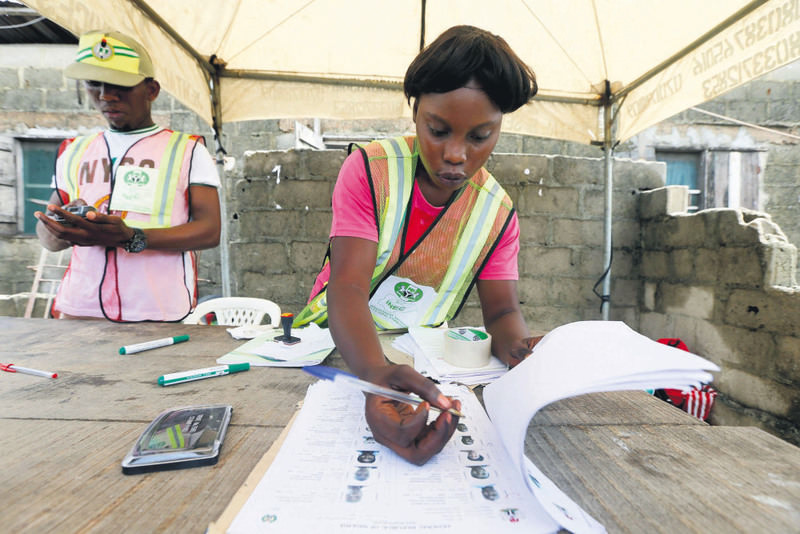 by Compiled from Wire Services Apr 13, 2015 12:00 am
Nigeria's opposition All Progressive Congress (APC) seems to be making big gains in the country's recently keenly-fought governorship polls, with 10 out of the 15 states so far declared going to its candidates. In the southwestern Ogun state, incumbent Governor Ibikunle Amosun of the APC got 306,988 against 201,440 for Adegboyega Nasir Isiaka of the People's Democratic Party (PDP), according to official results by the Independent National Electoral Commission. In Oyo state, also in the southwest, APC's incumbent Abiola Ajimobi was declared the winner with 327,310 votes against 254,520 for his closest rival Rasheed Ladoja of the Accord Party. Ajimobi has become the first ever democratically elected governor to win two terms since Oyo's creation in 1976. APC's Aminu Tambuwal, who is the current House of Representatives Speaker, has won northwestern Sokoto State with 647,609 votes against 269,074 for PDP's Senator Abdallah Wali. The state is currently governed by Aliyu Magatakarda Aliyu, who defected from PDP to the APC last year. The APC's Governor Ibrahim Geidam of Yobe has also been reelected, polling 346,016 votes against 182,495 for the PDP candidate. Akinwunmi Ambode of the APC has also been declared winner in Lagos State, racking up 811,994 to beat PDPs Jimi Agbaje who got 659,788. Lagos has always been held by the opposition since 1999. APC's incumbent Governor in north-central Kwara State has been reelected, polling 295,832 votes against 115, 220 votes for PDP's Simeon Ajibola. In northwestern Kano, APC's Abdullahi Umaru Ganduje won the state with 1,040,612 votes as against 317,383 for the PDP's candidate. Kano is currently being held by Rabiu Musa Kwankwaso, who defected from PDP to the APC last year.

Nigerians went to the polls Saturday to elect governors to 29 out of the country's 36 federal states. The APC, of president-elect Muhammadu Buhari, seemed to be making inroads in states earlier held by the PDP, which had governed Nigeria since 1990. APC candidate Mohammed Abubakar won the northeastern Bauchi State, currently being governed by the PDP, with 654,934 votes against only 282,650 for PDP's Auwal Jatau. Aminu Bello Masari, the APC's candidate, was also declared the winner of the election in northwest Katsina, currently being held by the PDP, with 943,085 votes. APC has also won in the high-stake Kaduna state with its candidate Nasir El-Rufai polling 1,117,635 votes against 485,833 for incumbent Governor Ramalan Yero of the PDP.

The APC party is also leading with huge votes across many other states like Niger and Benue in the north central; Borno in the northeast; Imo in the southeast; and Zamfara, Kebbi and Jigawa in the northwest. Forecasts predict a win for APC in at least 18 of the 29 states where governorship election was held - thanks in part to what is called the Buhari effect. Buhari, the APC's candidate, won the March 28 presidential race after defeating incumbent President Goodluck Jonathan of the PDP. The PDP, meanwhile, has been declared victorious in five states so far. PDP's Emmanuel Udom won the south south Akwa Ibom State with 996,091 votes against 89,865 for his APC rival Umana Okon Umana. The state is currently ruled by Godswill Akpabio, also of the PDP. Incumbent northeastern Gombe State Governor Ibrahim Dankwambo of the PDP won with 285,369 votes against 205,132 for APC's Inuwa Yahaya. The PDP also retained the southeastern Ebonyi State with its candidate Dave Umahi polling 289,867 votes to beat his closest rival Edward Nkegwu of the Labour Party who got 124, 817 votes. Ifeanyi Ugwuanyi of the PDP won in southeastern Enugu State, polling 482,277 votes to beat APC's Okey Ezea who only got 43,839 votes. Darius Ishaku has, meanwhile, retained Taraba State for the PDP with 310,805 votes against 261,326 for the APC's Jummai Alhassan, a woman. PDP is expected to win in south Delta, Cross River and Rivers states.

The party of Nigeria's outgoing president Goodluck Jonathan won a landslide victory in the governorship election for the key oil-producing Rivers state, officials said on Monday.

There was no immediate comment from PDP main rival, APC, but the defeated candidate had already described the poll as a "sham", citing failures by organizers and security services. Jonathan's PDP took the southern state with 1,029,120 votes, against just 124,896 cast for the APC, the electoral commission said. Jonathan lost the presidency to APC candidate Muhammadu Buhari in decisive elections last month that were considered the freest and fairest yet in Africa's biggest oil producer and economy.

The parties faced off again on Saturday in elections for Nigeria's powerful state governors, who control budgets larger than those of some small nations. Voting had to be extended into Sunday in some areas in several states including Rivers due to ballot box snatching and violence. In some, polls have been delayed even longer. The electoral commission reported 66 instances of violence at polling stations, with the highest number in Rivers and other southern states. Rivers state defeated incumbent governor Amaechi defected from the PDP to the APC two years ago and has been feuding with President Goodluck Jonathan ever since.
Last Update: Apr 13, 2015 10:55 pm
RELATED TOPICS