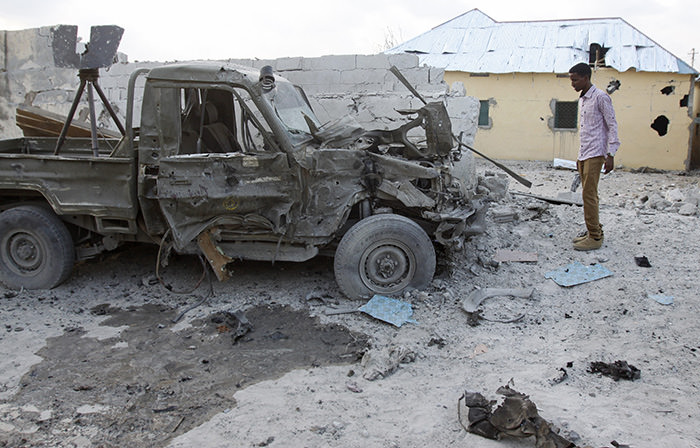 Somali man stands near the wreckage of a car that carried the bomb and was detonated at the gate of one of Mogadishu's most popular hotels on March 27 (AP Photo)
by Compiled from Wire Services Apr 14, 2015 12:00 am
Twenty-six people, mostly civilians, were killed on Tuesday in a militant attack on the Education Ministry headquarters in central Mogadishu, a Somali police source has said.

"A car loaded with explosives rammed the gate and there is gunfire inside the building of the ministry," police official Mohamed Dahir said.

The building is in the K5 district of the capital, which has been hit by a string of similar attacks in recent months.

26 people were killed on Tuesday in an attack on a government office complex in the capital, according to police.

The attackers stormed the ministry of higher education after a suicide car bomber detonated his vehicle at the gate of the office complex, opening the way for gunmen to enter, said Hussein.

Turkey has strongly condemned a militant attack on the headquarters of Somali government's Education Ministry in the Somali capital of Mogadishu.

"We condemn the attack that was perpetrated against government institutions in Somalia and we wish God's mercy on those who lost their lives, convey our sympathies to their families and wish for the speedy recovery of the wounded," the Turkish Foreign Ministry said in a statement Tuesday.

Turkey will continue its solidarity with Somalia in its fight against terrorism, it added.

Al-Shabaab, which is waging a years-long insurgency against the Somali government, has recently suffered several setbacks, including the loss of most of its strongholds in the country's southern and central regions.

Al-Shabaab fighters have carried out a string of revenge attacks in neighbouring countries, notably Kenya and Uganda, in response to their participation in the AU force.

It carried out its deadliest attack yet earlier this month, when Shebab gunmen massacred 148 people in a day-long siege of a university in Kenya's northeastern town of Garissa.
Last Update: Apr 15, 2015 10:51 am
RELATED TOPICS