Amnesty: Migrants facing ‘horrific’ abuses in Libya have no choice but to risk their lives 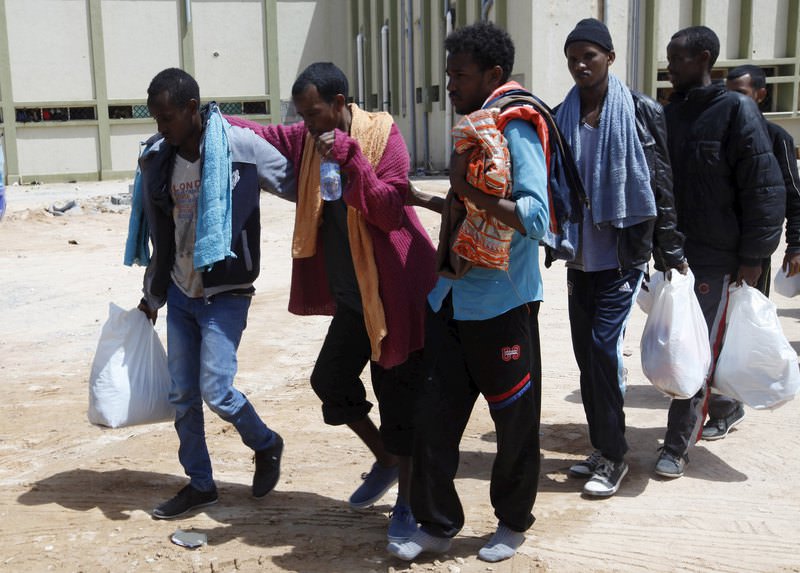 Migrants help another migrant walk to a bus bound for an immigration centre in the coastal city of Misrata, Libya, May 9, 2015 (Reuters Photo)
by Begüm Tunakan May 11, 2015 12:00 am
Facing "horrific" abuse at immigration detention centers in Libya and/or by smugglers, migrants and refugees have no choice but to risk their lives to reach European shores, according to a new Amnesty International briefing published Monday. "Such horror stories about the dangers driving migrants and refugees to flee Libya highlight the continuing, desperate need to save lives in the Mediterranean. European leaders must ensure that refugees and migrants fleeing conflict and human rights abuses are never pushed back to Libya," said Philip Luther, Amnesty International's Middle East and North Africa director.

"The ghastly conditions for migrants, coupled with spiraling lawlessness and armed conflicts raging within the country, make clear just how dangerous life in Libya is today. With no legal avenues to escape and seek safety, they are forced to place their lives in the hands of smugglers who callously extort, abuse and attack them," he added.

In a report entitled "Libya is full of cruelty: Stories of abduction, sexual violence and abuse from migrants and refugees," migrants and asylum seekers in Libya have been subjected to systematic discrimination and exploitation while "fac[ing] widespread abductions, torture, theft and physical assaults by criminal gangs and human smugglers, often at Libya's southern borders and along the smuggling routes to the Libyan coast."

Amnesty called on EU leaders to "provide safe alternative routes for the people desperate to flee conflict in Libya" to resolve the Mediterranean migrant crisis. "The commitment made by EU leaders to deploy more resources for search and rescue [operations] is a welcome step, but more people will continue to drown in the Mediterranean Sea unless rescue vessels are delivered promptly, deployed in areas where they are needed most – where most calls for help come from - and remain available for as long as high numbers of refugees and migrants continue to depart from Libya," Luther said.

Libya draws attention not because of ongoing turmoil across the country, but because it has become a major hub for people smugglers who are committing grave human rights violations. The illegal transportation of migrants and refugees departing the Libyan coast have led to more than 1,600 lives being lost on the Mediterranean Sea this year, and the reported migrant fatalities is expected to increase as more than one million people are waiting in Libya to reach European shores.

During Moammar Gadhafi's one-man rule, Libyan authorities were unable to fully control their frontiers, with hundreds of people crossing them daily from sub-Saharan Africa via Sudan, Niger and Chad. Gaddafi, who was ousted from power in Libya's 2011 uprising and killed, had used immigration to pressure Europe, opening and closing gates to migrants depending on the state of relations with EU members – notably with former colonial power, Italy.

Gaddafi used to claim five billion euros per year from Europe for border surveillance and to fight against people smuggling. Between 2008 and 2011, the flow of illegal migrants from Libya to Europe dried up after the signing of a treaty with Rome. However, following the toppling of Gaddafi's 42-year-long rule, Libya has once again emerged as a hub for smugglers who operate with impunity. Libya has long been suffering from the chronic absence of security and order, as numerous attacks, kidnappings and crimes demonstrate. Moreover, the central government appears to not wield enough power to save the country from long-lasting political instability and violence, as it lacks security control over the country's borders.

The increasingly violent and chaotic situation in the Middle East has led many people to flee the conflict in an attempt to seek security and shelter in more prosperous and peaceful countries in Europe. More than 218,000 refugees and migrants arrived in Europe via the Mediterranean in 2014, as indicated by the U.N., with more than 110,000 migrants crossing through Libyan territory.
Last Update: May 11, 2015 5:46 pm
RELATED TOPICS