Burundian president back in charge after attempted coup 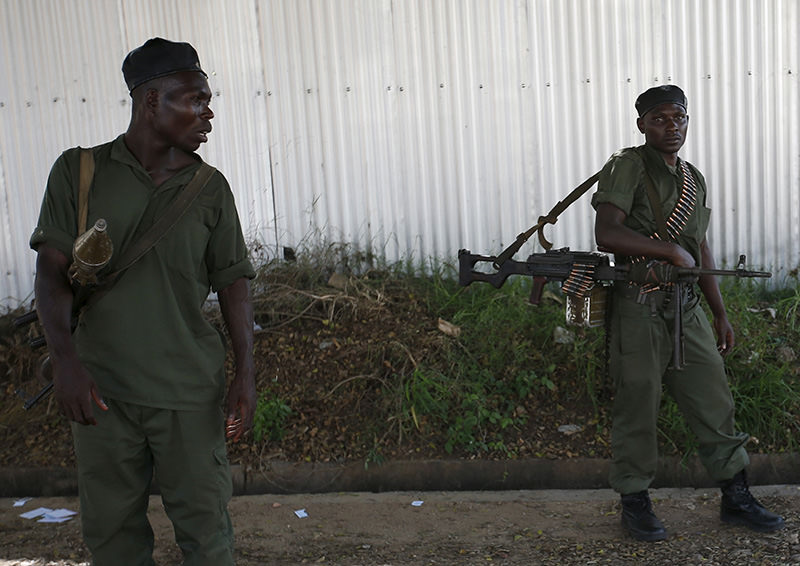 Soldiers, loyal to President Pierre Nkurunziza, hold weapons near the body of a soldier (not in picture), loyal to the coup leader, at a street in Bujumbura, Burundi, May 14, 2015 (Reuters Photo)
by Compiled from Wire Services May 15, 2015 12:00 am
Two senior army officers and a police general accused of taking part in an attempted coup in Burundi have been arrested, a presidential spokesman said on Friday, as it became apparent that a military plot to oust President Pierre Nkurunziza had fizzled out.

The streets of Bujumbura were mostly calm on Friday following fighting on Thursday between loyalist troops and forces supporting Niyombare, who announced the coup bid on Wednesday while Nkurunziza was in Tanzania for a meeting with regional leaders about unrest in his country.

Nkurunziza's bid for a third term had triggered protests over several days with opponents saying it violated the constitution as well as peace accords that ended a civil war. At least 15 people were killed in the demonstrations that began on April 26, a day after the ruling party made Nkurunziza its presidential candidate. Burundi's presidency late Thursday saluted the police, who had tried to quell the demonstrations, for their patriotism. Burundi's constitution states a president can be popularly elected to two five-year terms. Nkurunziza maintains he is eligible for a third term because parliament elected him to his first term, leaving him open to be popularly elected to two terms.

South Africa condemned the attempt to seize power through unconstitutional means in Burundi, Minister of International Relations Maite Nkoana-Mashabane said on Friday. Nkoana-Mashabane added that South Africa would lend its support to efforts of the East African Community to resolve the conflict in Burundi. Meanwhile, a civil society group in Burundi that had a prominent role in protests against Nkurunziza called on Friday for rallies to continue, the movement's deputy said, adding his group had nothing to do with a failed coup attempt. "Protests to reject the third term bid for Nkurunziza will continue," said Gordien Niyungeko, deputy head of Focode, one of the 300 civil society groups that backed protests. "Our movement had nothing to do with the attempted coup or the failed coup."

More than 100,000 Burundians have fled to neighboring countries since political violence erupted in April, the U.N. said on Friday, as the country reels from the foiled coup attempt. U.N. High Commissioner for Refugees (UNHCR) spokeswoman Karin de Gruijl said nearly 70,200 people had fled to Tanzania, 26,300 to Rwanda and nearly 10,000 to the South Kivu region of the Democratic Republic of Congo. The number was more than double the figure provided by the UNHCR a week ago.
Last Update: May 15, 2015 5:30 pm
RELATED TOPICS