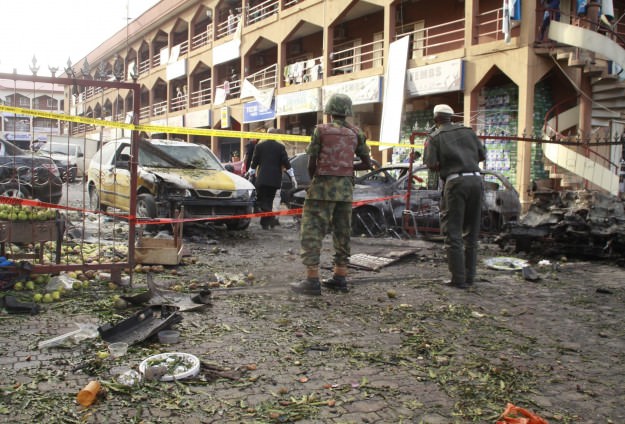 |AA Photo
by Anadolu Agency May 16, 2015 12:00 am
At least nine people were reportedly killed when a female suicide bomber struck a major motor park in Damaturu, the provincial capital of Nigeria's northeastern Yobe State.

"We have nine casualties at the moment but it could rise. We have 23 injured, four of them critically injured," Rabiu Ganduru, a medic at Damaturu general hospital, told Anadolu Agency.

He said the casualties occurred when a female suicide bomber blew herself up at the motor park.

"A female suicide bomber disguised as a passenger struck at Damaturu central motor park around 12noon," he said.

Bala Afuwa, a resident of Damaturu, said the bomber blew herself up after workers at the park who suspected her "funny conduct" tried to stop her from entering the park.

"She immediately blew herself up apparently to avoid being caught," Afuwa said.

"About nine people died while dozens others were injured and taken to hospital. The army has cordoned off the place now," he said.

The bomber is believed to work for the Boko Haram militants who have waged violent insurgency in the region since 2009.

Damaturu has rarely been attacked, although Yobe commercial town of Potiskum had repeatedly been targeted by suicide bombers who killed many in the process.
Last Update: May 22, 2015 12:03 am
RELATED TOPICS