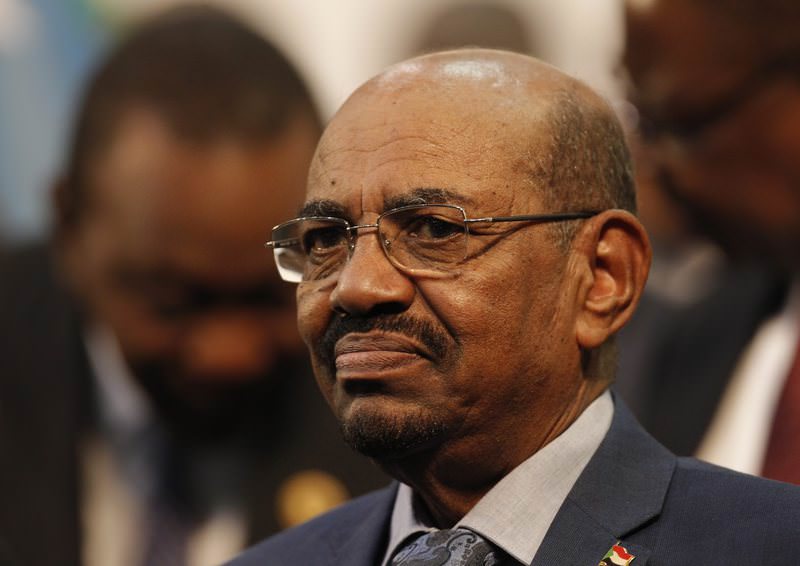 by Daily Sabah with AA Jun 14, 2015 12:00 am
A high court in South Africa has issued an interim order to stop Sudanese President Omar al-Bashir from leaving the country.

The order came when al-Bashir was in the South African city of Johannesburg to attend the 25th African Union Summit.

The South African court is now expected to decide later in the day whether or not to hand the Sudanese leader over to the International Criminal Court at The Hague, which issued an arrest warrant against al-Bashir in 2009.

Al-Bashir is accused of committing war crimes and crimes against humanity in Sudan's Darfur region.

Speaking exclusively to Anadolu Agency, the Sudanese president said that African leaders "refuse guardianship and they are the masters of their decisions."

He added that the International Criminal Court "is finished and the African Union summit is now a funeral and burial ceremony."

Bashir expressed his satisfaction with his participation at the Johannesburg summit, praising the host country South Africa.

The Sudanese president also described his country's relationship with South Africa and the African Union as "excellent".

Sudanese officials have reacted strongly to the interim order.

Sudanese Foreign Minister Ibrahim al-Ghandour told Anadolu Agency in Johannesburg that the South African court's ruling had "no value", adding that the International Criminal Court's demand to arrest al-Bashir was "unacceptable to the African leaders".

About the ICC's arrest demand, he said it "comes within the context of provocations against the African leaders alongside with what some European parties do to achieve their own interests in Africa".

He alleged that the ICC arrest demand was because of two reasons: the first being that Sudan was an African country and the other was, what he simply termed as "greed". He said that there was an attempt to achieve justice by "a fake court and by threatening Sudan". He called for justice that was applied equally to "the white and the black".

He also said that al-Bashir came to attend the African Summit on an official invitation extended by the host country, South Africa, with which Sudan had "strategic relations".

State Minister for Foreign Affairs Kamal Ismail also addressed a press conference over the issue in the Sudanese capital of Khartoum on Sunday, where he declared: "There is no risk to the president's safety."

Ismail also rejected the South African court's interim order. "The court's decision is an internal affair of South Africa that has nothing to do with us or the state heads meeting," he said.

In a hint that certain diplomatic immunity provisions might protect the Sudanese president from possible arrest, he added: "South Africa had informed us earlier that it will provide all the logistical and security procedures for President al-Bashir, within its obligations of the African Union's decision of not to cooperate with the [International] Criminal Court."

"Al-Bashir is a fugitive from justice. If the government of President Zuma fails to arrest him, it would have done nothing, save to give succor to a leader who is accused of being complicit in the killing of hundreds of thousands of people in a conflict," Netsanet Belay, Amnesty International's Research and Advocacy Director for Africa, said late Friday.

"As soon as he lands in South Africa, the authorities must arrest al-Bashir and ensure that he is transferred to the International Criminal Court," Belay said in a statement.

South Africa is a signatory to the Rome Statute that formally established the International Criminal Court, which means they can arrest anyone accused of committing genocide, crimes against humanity, war crimes or crimes of aggression.

However, experts believe it will be difficult for South Africa to effect al-Bashir's arrest because he is a guest of the African Union and not the government of South Africa.

"It would be unfortunate if South Africa arrested any African head of state wanted by the International Criminal Court because they accepted to host all leaders," international relations expert Tom Wheeler told Anadolu Agency in an earlier interview.
Last Update: Jun 14, 2015 8:52 pm
RELATED TOPICS