Ugandan women battling the odds to fight for titles 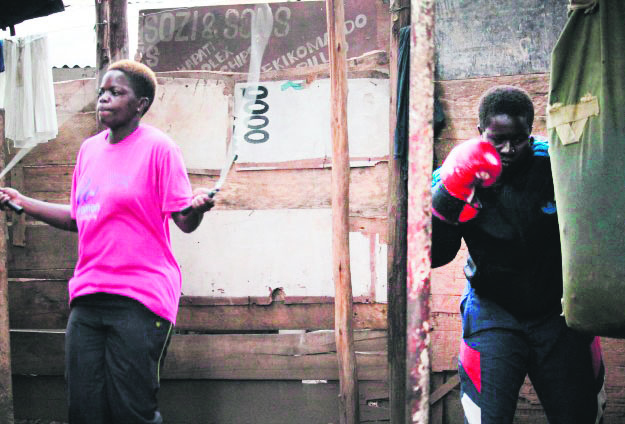 by Anadolu Agency Jul 03, 2015 12:00 am
In a deprived Ugandan slum, half-sisters and national champions Hellen and Diana explain how they are beating the odds. The punching bag sways from side to side absorbing the powerful blows being dealt by 27-year-old Hellen Baleke. With sweat pouring down her dark, smooth face, her feet and body move effortlessly in sync. "Jab, jab! Jab, jab!" her coach, Innocent Kapalata, barks at her. "Hit twice with one hand and repeat with the other!"

"Resting time," Kapalata says two long, intense minutes later. As she sits down to talk with an Anadolu Agency correspondent, Hellen bares her white teeth through a wide smile, still panting from the intense training. "I joined boxing after being beaten up by a boy when I first arrived in Kampala at the age of 16," the current female welterweight national boxing champion said. "After being beaten up, I looked for a gym to practice self-defense," she said. "But instead, I discovered that I could continue with boxing as a career." The gym she eventually settled on is located in the Katanga slum, which lies between Uganda's national referral hospital and one of Africa's leading higher education institutions, Makerere University. Three-hundred meters off the main road, through muddied alleys coated in filthy water and littered with garbage, an open space comes into view, Rhino Boxing Club.

Its back wall is shared with a nursery school and the others with shanty houses. Rusty iron sheets hang lazily over wood in what passes for a roof in this deprived part of the Ugandan capital.

But it is in this open, gritty place where nine young women train every morning and every evening to hone their boxing skills.

Hellen is the eldest.

"There were many young women here, but many left because of the poor training conditions but also for marriage and child bearing," she recounted. Hellen's 23-year-old half-sister Diana Turyanabo is also a boxer. Both young women live with their mother in a small shanty house in Katanga slum, a place that over 20,000 other families also call home. Hellen has seven medals to her name and more certificates from fights she has had in Uganda, Kenya and Rwanda than she knows what to do with. Despite this clear fighting prowess, her fights have not earned her any substantial or sustainable income.

She is hopeful that the National Boxing Federation will organize bigger and better fights for her outside Uganda. "I know I can better my future through boxing if I can just get an international fight. I am sure I would return with some money and build a small house for my family," the current national welterweight champion said.

Hellen was among the four women who represented Uganda in the eighth International Boxing Association (AIBA) Women's World Boxing Championships in November last year in Jeju, South Korea. "I fought for a full week with different opponents of different body weights and heights. This posed great challenges, so I needed to focus," she recalled.

Diana is the reigning national light welterweight champion and hopes to be selected as part of the national team ahead of the Commonwealth games in 2016.

She was inspired to start boxing by her half-sister Hellen, who defended her from bullies at school. "We used to wait for those who teased me outside the gate and my sister would help me beat them up," she said. When Diana started secondary school in 2007, Hellen called her half-sister and told her: "You need to join a boxing club and learn how to defend yourself. I will not be there to defend you all the time."

She joined Rhino in the same year, and two years later won her first fight.

"I went into the ring and won the fight. I came out obsessed with boxing. Now, when I hear the bell ring before a fight, I feel at home," she said.

Frustratingly, however, Diana says that the support given to females at a national level is minimal. "When we went to Jeju, we had no uniforms," she said. "Whenever it was our turn to fight and they called out Uganda's name, instead of our tracksuits identifying us, we had to raise our hands." "We were also told about our participation two weeks before the start date," she added. "That was not enough time to prepare."
Last Update: Jul 03, 2015 10:57 pm
RELATED TOPICS