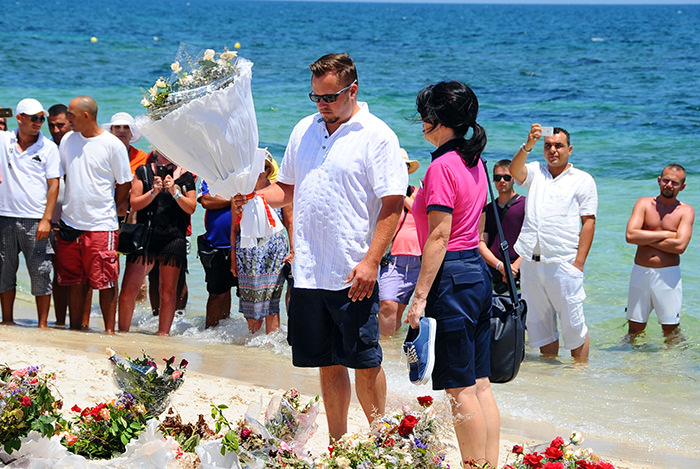 tourists lay flowers to honor the victims of a deadly beach attack a week ago that killed 38 people,in Sousse, Friday, July 3, 2015 (AP Photo)
by Jul 05, 2015 12:00 am
The Tunisian man behind last month's massacre of foreigners at a seaside resort had previously worked in tourism, officials said on Sunday, as his mother insisted the young man was "brainwashed".

In an interview on Sunday, Prime Minister Habib Essid revealed more details about 23-year-old Seifeddine Rezgui, who gunned down 38 foreign tourists in the June 26 attack.

"We know he was a member of a dance club and was familiar with the tourism sector, having worked in it as an events organizer," Essid told the French-language newspaper La Presse.

Tourists fled in horror as Rezgui pulled a Kalashnikov assault rifle from inside a furled beach umbrella and went on a shooting spree outside a five-star hotel.

The attack at Port El Kantaoui, north of Sousse, killed 30 Britons, three Irish nationals, two Germans, one Belgian, one Portuguese and a Russian.

Rezgui was shot dead by police.

Both the authorities and relatives later described him as having been an apparently normal young man who had been keen on break-dancing.

His mother Radhia Manai, 49, told Britain's Sunday Times her son must have been "brainwashed" by extremists as previously he would not have hurt a mouse.

"When they told me my son had killed all these people I said no, it's impossible," she said.

"I can't believe it. Once there was a mouse in the house and I asked Seifeddine to kill it and he refused saying, 'I can't kill anything.'

"God bless the victims, all those people and their poor families, and I feel so sorry but I want to tell them it wasn't my son who did this, it was another Seifeddine," she said.

She said he was "a victim like all the others".

A resident near where his parents live in the town of Gaafour had previously told AFP that Rezgui worked "in tourism in the area of Kantaoui", where the attack is thought to have been planned, although there had been no confirmation of this from another source.

The attack on the beach and around the swimming pools of the Riu Imperial Marhaba Hotel was claimed by the self-proclaimed Islamic State in Iraq and al-Sham (ISIS) group.

The authorities have admitted that the transformation of an apparently normal young man caused amazement in Tunisia.

Essid pledged to La Presse "substantive work... on culture and education", in addition to economic reforms.

"We now know what causes individuals to become involved in extremism, be it financial difficulties or religious ideology," he said.

"We are also studying ways of 'deradicalizing' our young people who return from Syria."

On Saturday, eight days after the deadly rampage, President Beji Caid Essebsi declared a state of emergency, saying the attack had left Tunisia facing a "special type of war".

The measure, effective from Saturday for a 30-day period, allows authorities to bar strike action and public meetings deemed dangerous to public order and to increase controls on the media.

"There is a real fear that declaring the state of emergency will lead to the criminalization of social protests," said Hamza Meddeb of the Carnegie Middle East Centre.

"The problem in Tunisia is the lack of a national anti-terrorism strategy that would put in place real intelligence gathering and control of sensitive sites," he said.

On Friday, Essid had admitted there were security failings, telling the BBC: "The time of the reaction -- this is the problem."
Witnesses had said at least 30 minutes elapsed from the time the first shots were fired until the police arrived.

Essid told La Presse that security agents had tried to intervene when the attack unfolded, but that a weapon jammed.

"It has to be said that national guard members on an inflatable boat intervened very quickly.

"They fired at the assailant but didn't hit him... then their gun jammed."

As for rapidly bringing in reinforcements, "to reach the resort of Port El Kantaoui we had to cross the entire city of Sousse on Friday at noon", Essid told the paper.

"An investigation is now under way to define responsibilities for the delay," he said.
Last Update: Jul 05, 2015 7:04 pm
RELATED TOPICS