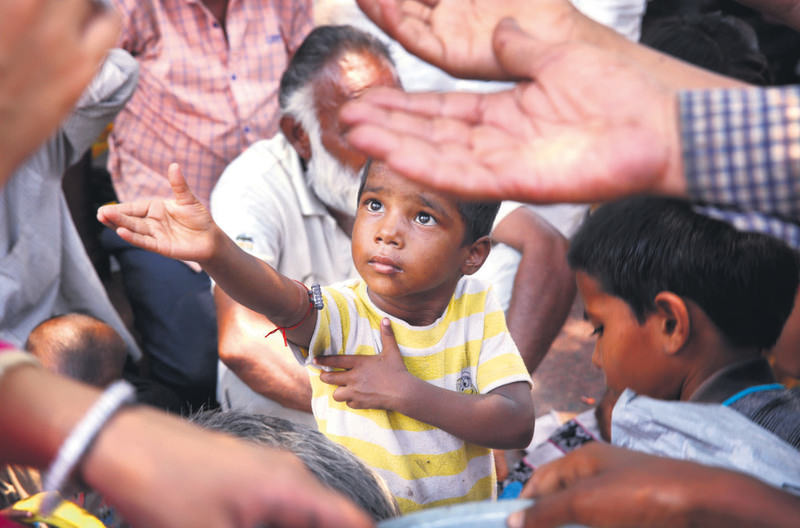 An Indian child stretches arms to receive free food being distributed outside a Hindu temple, in New Delhi, India
by Daily Sabah Jul 13, 2015 12:00 am

The U.N.'s financing conference kicked off in Addis Ababa with calls to ensure the necessary resources to improve people's lives while protecting the planet

The Third International Conference on Financing for Development began this Monday in the Ethiopian capital Addis Ababa. The U.N. conference, which gathers high-level political figures as well as stakeholders from both relevant fields in both the private sector and non-governmental organizations, is held at the U.N. Conference Center at the headquarters of the U.N. Economic Commission for Africa.

The convening groups will begin planning and contributing to support and implement a post-2015 development agenda, including the Sustainable Development Goals (SDGs), which are expected to be launched at the upcoming U.N. General Assembly in New York in September.

The three-day conference, which is scheduled to end on July 16, is looking to strengthen global partnerships for financing sustainable development. The goal is to secure resources to contribute to the global well-being of people, while paying keen attention to the well-being of the planet.

"You have recognized that in a world in which both the global population and resource constraints are growing, development finance needs a reboot," U.N. Secretary-General Ban Ki-moon said at the conference's opening in Addis Ababa.

He added that world leaders must put aside "narrow self-interest" to break the deadlock over how to finance the U.N.'s bold new global development agenda. Multilateral development banks, including the World Bank, the African Development Bank and the Asian Development Bank, as well as the International Monetary Fund on Friday signaled plans to extend more than $400 billion in financing over the next three years to help mobilize resources to achieve the development goals.

"We need trillions, not billions, of dollars to accomplish these goals, and the money will come from many sources: developing countries, private sector investment, donors, and international financial institutions," Jim Yong Kim, President of the World Bank Group said in a statement.

Identifying obstacles that have kept current goals from being achieved and initiatives to overcome them will also be discussed. The U.N. held the first International Conference on Financing for Development in Monterrey, Mexico, in 2002, which resulted in the Monterrey Consensus. This consensus set the foundation and structure of action to be taken in order to reach goals of economic empowerment and tackling unemployment, inequality, and fostering economic growth among women and youth. It was decided that environmentally and globally conscious investments in technology could help accelerate and support these goals.

Emphasized in the consensus was every nation's individual responsibility in fostering economic and social development.

The decisions and commitments made in Addis Ababa are important to the field of development and the last phase of the fight against global poverty. Despite progress made since the Monterrey conference, climate change, terrorism, and political turmoil halt and even overturn accomplished goals. New partnerships, goals, and investments in creative and innovative technology are necessary to meet the growing needs and complexities of tackling poverty around the world.

To that end, concrete commitments to sustainable development in the fields of finance, trade, debt, governance, technology and innovation are also expected to be made at the conference. To be discussed are the U.N's Post-2015 Development Goals, which will be officially agreed upon in September, becoming the next stage of global development plans following the Millennium Development Goals, the deadline of which to reduce extreme poverty is this year.

"... Without resources, commitments will amount to little more than promises on paper," Ban declared, saying the outcome of the conference – to be known as the Addis Ababa Action Agenda – will be the starting point of the future of financing sustainable development.

Established within the Department of Economic and Social Affairs (DESA) of the United Nations Secretariat in January 2003, the Financing for Development Office (FfDO) is in charge of providing substantive secretariat support to ensure the implementation of goals and commitments established at the International Conferences on Financing for Development. It is also in charge of financing for development-related aspects of other main U.N. conferences and summits, such as the United Nations Conference on Sustainable Development. Secretary General Ban stressed that "[t]hrough a renewed global partnership, solidarity and collective action, we can and will mobilize the resources to achieve a prosperous and sustainable future for all."
Last Update: Jul 13, 2015 10:33 pm
RELATED TOPICS