Around 2,700 migrants rescued at sea near Libya 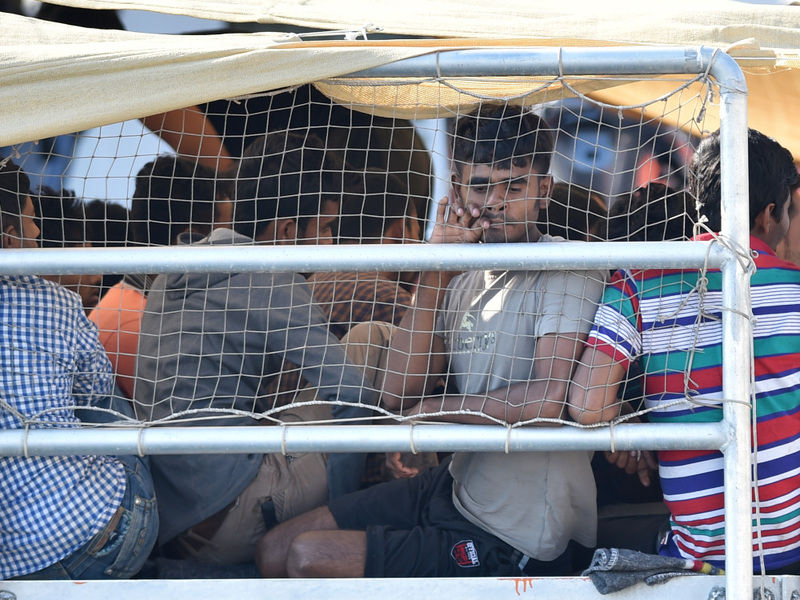 Migrants wait to disembark from the Migrant Offshore Aid Station (MOAS) vessel Phoenix at the harbor of Messina, Sicily on July 15.
by Daily Sabah with Wires Jul 16, 2015 12:00 am

The Italian coast guard said some 2,700 migrants were rescued from 13 boats near Libya in a single day, as Europe continues to struggle with the unstoppable migration crisis

Around 2,700 migrants were rescued at sea last Wednesday from 13 boats near Libya, Italy's coast guard said.

A German navy vessel and a search and rescue ship deployed by medical charity Doctors Without Borders assisted with the rescue operation along with the Italian navy and coast guard. A spokeswoman for the Italian coast guard said the rescues had all been conducted in an area around 55 kilometers from the coast of Libya. An estimated 150,000 migrants have reached Europe by sea so far in 2015, most of them to Greece and Italy, the International Organization for Migration (IOM) reported on July 12. However, more than 1,900 migrants have drowned in the Mediterranean in 2015 alone, twice the amount than the same period last year, said spokesman Joel Millman.

The United Nations refugee agency said on July 10 that Greece urgently needed help to cope with 1,000 migrants arriving each day. The vast majority of the migrants fleeing war and poverty in Africa and the Middle East depart from Libya, where human traffickers have taken advantage of a breakdown in order since the 2011 uprising to build up a lucrative business and make large sums of money from the illegal transportation of people ready to risk their lives on a dangerous journey. The IOM's announcement came just a month after the 100,000th refugee was counted in Europe, and the U.N. warned the surge in arrivals was creating humanitarian crises that required a "collective and far-reaching" European response. According to UN High Commissioner for Refugees figures, of the more than 219,000 migrants who tried to cross the Mediterranean in 2014, at least 3,500 lives were lost. Hundreds have also died this year attempting to make the perilous crossing to Europe, including some 750 people when a trawler sank in April.

The increasingly violent and chaotic situation in the Middle East has led many people to flee the conflict in an attempt to seek security and shelter in more prosperous and peaceful countries in Europe. More than 218,000 refugees and migrants arrived in Europe via the Mediterranean in 2014, as indicated by the U.N. More than 110,000 migrants crossed through Libyan territory in 2014 alone, according to U.N. figures. These numbers have been gradually increasing, as hundreds of immigrants hope to reach the European shores of Italy, Malta, Spain, Greece and Cyprus. More than 35,000 migrants have arrived by boat in southern Europe so far since the beginning of this year, according to figures released by the U.N. refugee agency.

The shores of Libya are only about 300 kilometers from Lampedusa, the southernmost island of Italy, which is now sheltering thousands of illegal migrants. The North African country has 1,770 kilometers of coastline and 5,000 kilometers of porous land borders in mostly arid areas that are sparsely populated.

In the face of the overflow of migrants, how the EU is addressing the immigration crisis is becoming a major point of concern for European countries and the international community. Considering the sharp increase in the number of migrants trying to reach Europe, EU policies on migrants have been accused of undermining the value of human life while imposing strict measures over search and rescue operations. Last week, Amnesty International accused the EU of leaving migrants and refugees trapped without protection in the Balkans while they try to access EU member countries.

Amid criticism directed at European countries, Hungary began building a fence along its border with Serbia to stop the flow of migrants, leading to protests in the capital Budapest. The U.N. and the Council of Europe have criticized the changes to Hungary's asylum laws, saying they would harm asylum-seekers' right to seek safety there as well as put them at risk.
Last Update: Jul 16, 2015 11:31 pm
RELATED TOPICS