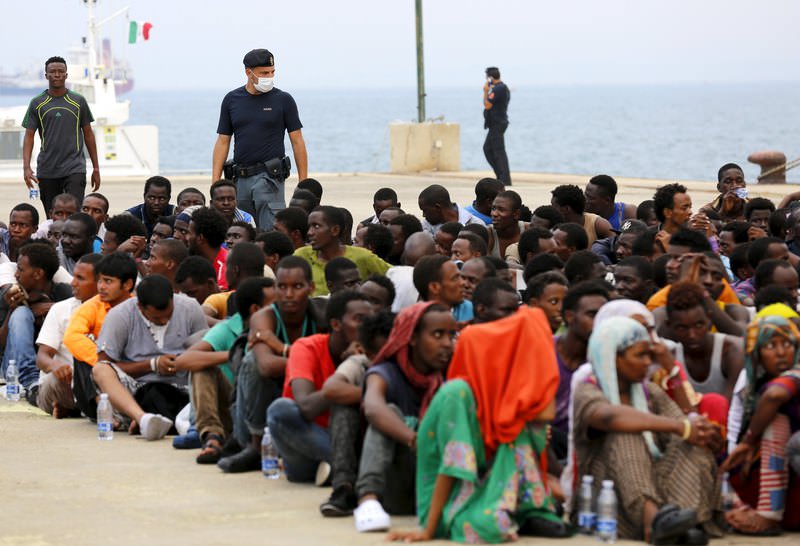 | REUTERS Photo
by Jul 23, 2015 12:00 am
40 migrants seeking to reach Europe are feared to be dead after their inflatable dinghy sank off the Libyan coast, reported the Un refugee agency on Thursday.

"My colleagues are interviewing the survivors... who arrived this afternoon in Augusta (Sicily), and they are talking of 35 to 40 people missing at sea," UNHCR's spokesman in Italy, Federico Fossi, told AFP of the accident on Wednesday.

The refugee agency said most of the migrants were men from sub-Saharan African countries, including Somalia, Eritrea, Benin and Mali.

Italian daily La Reppublica said three dinghies set sail from Tripoli but one of them, with 120 people on board, started filling up with water and eventually sank.

The migrants fell into the water and most were rescued by a commercial boat and then by a German navy ship, the Holstein, which brought a total of 283 people to safety.

One 22-year-old Ghanaian cited by the newspaper claimed that some 30 of his fellow travellers had died.

International NGO Save the Children said women and children were among those missing.

"We have spoken to several (survivors) and their versions match. I have in front of me a young boy in tears, who says he has lost his brother. The victims are all from sub-Saharan Africa," Save the Children spokeswoman Giovanna di Benedetto was quoted as saying by La Reppublica.

More than 1,900 migrants have died so far this year making the perilous journey across the Mediterranean to Europe, out of around 150,000 people who have made the crossing, the International Organization for Migration said earlier this month.

The migrants are seeking refuge from conflicts and poverty in Africa and the Middle East.