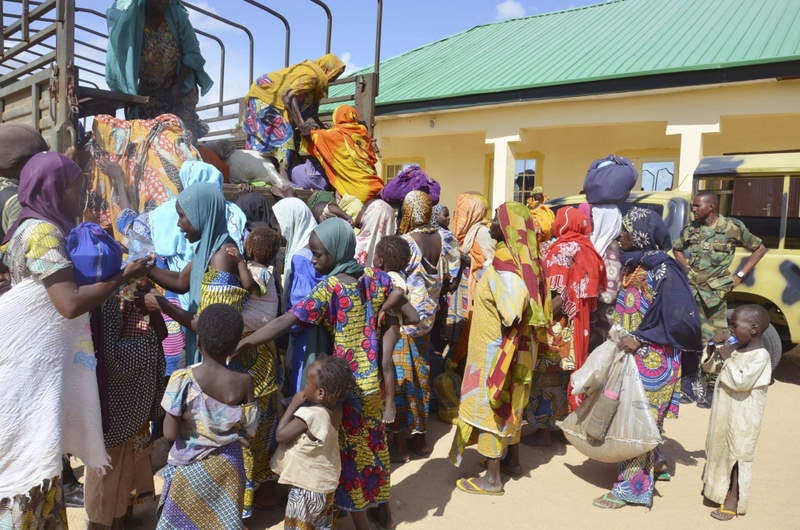 by Daily Sabah with AFP Aug 04, 2015 12:00 am
Nigeria's army claimed to have freed nearly 180 hostages, including more than 100 children, held by Boko Haram militants in a dramatic weekend rescue. The operation in the country's conflict-torn northeast also led to the capture of a Boko Haram commander, an army spokesman said in a statement late Sunday. The military said earlier that it had killed a "large number" of the militants in airstrikes in the northeast.

The operation took place on Sunday near Aulari, about 70 kilometers south of Maiduguri, the capital of Borno state, once a Boko Haram stronghold. "During the offensive operations, 178 people held captive by the terrorists were rescued," military spokesman Colonel Tukur Gusau said, without specifying when the rescue took place. "They include 101 children, 67 women and 10 men." The Nigerian military has announced the release of hundreds of people held by Boko Haram in recent months, especially in the notorious Sambisa forest, a longtime Boko Haram stronghold.

The airstrikes hit the village of Bita on the fringes of the forest not far from the Cameroonian border where the militants were preparing to launch an offensive, the military said. Many militants were killed, it added. Sunday's rescue came after several attacks by Boko Haram in recent days. Thirteen people were killed in an assault on Malari village about 20 kilometers from Maiduguri. Local farmer Moha Saleh confirmed the death toll and said 27 people were wounded when the militants stormed the village. "They also set many houses ablaze after accusing us of telling soldiers their whereabouts," he told Agence France-Presse (AFP).

Local resident Goni Musa, a vigilante who fights Boko Haram alongside the Nigerian military, gave the same death toll. "This morning 13 bodies were recovered. Some had been shot in the back, which means they were fleeing when the terrorists killed them," Musa said. "They burnt down houses and shops before they left. Our terrorized women and children fled into the bush and returned to Maiduguri this morning," he added.

Malari village has been the target of numerous attacks in recent months, including a suicide bombing by a youth in a mosque in the middle of the Islamic holy month of Ramadan in July, which left 12 people dead. Boko Haram has increasingly expanded its operations into neighboring countries in recent months, prompting Nigeria, Cameroon, Chad and Niger to launch a coordinated military offensive.

The four countries, along with Benin, are preparing to launch a new 8,700-strong force that officials say will go into action soon. Niger's President Mahamadou Issoufou on Sunday vowed that the new regional force would "eradicate" the insurgents. "The multinational joint force will eradicate ... the blind terrorism of Boko Haram," Issoufou said in a televised speech.

The militant group has stepped up its attacks since Nigeria's new President Muhammadu Buhari took office in May, unleashing a wave of violence that has claimed 800 lives in just two months. Witnesses said the group attacked the town of Gamboru on Saturday near the border with Cameroon. Residents in nearby villages said the militants had set fire to houses, sending columns of black smoke into the sky. Umar Babakalli, a refugee from Gamboru who fled to the nearby Cameroonian town of Fotokol several months ago, said he saw fighter jets circling overhead "but there was no sign of any airstrikes." It was not immediately clear if anyone had been killed in Gamboru, but Babakalli said the town, which has faced repeated Boko Haram assaults, was deserted. "There is nobody in Gamboru," he told AFP.

Since Boko Haram started its deadly assault in 2009, at least 15,000 people have been killed in violent attacks on civilian towns. More than 7,300 were killed in 2014 alone. Boko Haram's brutal attacks have increased in recent months, with at least 1,000 civilians having been killed since the beginning of this year, underscoring gross violations of human rights by Boko Haram, according to U.N. figures.
RELATED TOPICS