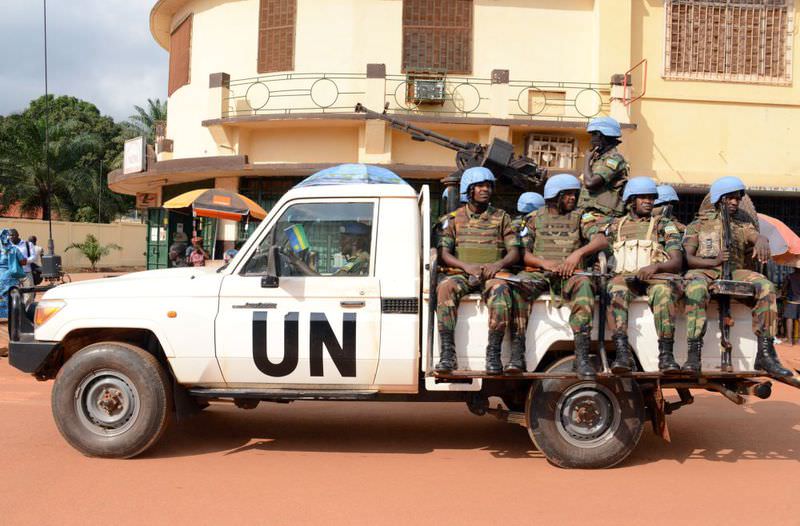 Having been accused of rape and sexual abuse in recent months in the Central African Republic, U.N. peacekeepers now face accusations of murder and rape in separate incidents

Amnesty International is accusing U.N. peacekeepers of indiscriminately killing a 16-year-old boy and his father and raping a 12-year-old girl in separate incidents in Central African Republic, the latest in a series of sexual and other allegations against peacekeepers there. U.N. Secretary-General Ban Ki-moon is "personally dismayed and disappointed," his spokesman said Tuesday. "We would like to emphasize once more that no misconduct of this nature will be tolerated," Stephane Dujarric told reporters.

The U.N., however, has no powers of criminal investigation or prosecution, leaving it up to peacekeepers' home countries which U.N. officials often don't name publicly. Amnesty International said the two incidents on Aug. 2-3 occurred as the peacekeepers from Rwanda and Cameroon were carrying out an operation in the capital, Bangui. U.N. peacekeepers have been in the country since September to try to calm unprecedented, deadly violence between Christians and Muslims.

The girl was hiding in a bathroom when a man wearing a U.N. peacekeeping helmet and vest "took her outside and raped her behind a truck," a statement from the human rights group said. It said a nurse who examined the girl "found medical evidence consistent with sexual assault." The next day, after armed clashes with residents had killed a soldier from Cameroon and wounded several others, peacekeepers went to the area and "began shooting indiscriminately in the street where the killings had taken place," the group said.

Amnesty International said resident Balla Hadji, 61, and his son Souleimane Hadji, 16, were shot and killed outside their home. The group said it interviewed 15 witnesses immediately after both incidents, plus the 12-year-old girl and her family. "An independent civilian investigation must be urgently launched, and those implicated must be suspended immediately and for the duration of the investigation," the organization's senior crisis response adviser, Joanne Mariner, said. But one week after the U.N. was first informed of the allegations, it was not clear just how the peacekeeping mission in Central African Republic was looking into them. The U.N. peacekeeping office in New York wasn't informed until Monday, despite its recent order to all peacekeeping missions to immediately tell it about any such allegations.

The mission's spokesperson, Hamadoun Toure, told The Associated Press that "personally, I don't think" the rape occurred. He said the peacekeepers had been trying to execute an arrest warrant for local judicial authorities when they were attacked, and that the girl was the sister of the suspect they were trying to arrest. "I don't know how we can reach out to this girl. They won't accept any contact," said Toure, interviewed by telephone from Central African Republic. He said the mission doesn't have the names or details of the accused peacekeepers.

In an email from Bangui, the Amnesty International researcher in Central African Republic, Jonathan Pedneault, said the peacekeeping mission's human rights division has "sadly, due to their own security constraints" not yet been able to investigate at the scene. "In the rape case, the operation took place in the dead of night in a frantic atmosphere," lit only by the peacekeepers' flashlights amid a local power cut, he said. He also said an international medical organization has been following the girl but that UNICEF has not yet been able to visit her family.

The U.N. has been under international scrutiny over its handling of allegations of child sexual abuse by French soldiers in Central African Republic last year, and an independent panel is now looking into that case. In addition, U.N. peacekeepers in Central African Republic have been accused in recent months of rape and sexual abuse. In late June, mission head Babacar Gaye in a statement said he was "outraged" by allegations that U.N. peacekeepers had sexually abused street children in Bangui. And in early June, the peacekeeping mission launched an investigation into an allegation of child sexual abuse received against one of its peacekeepers in the eastern part of the country. "This is clearly not only not normal, it is not acceptable," Dujarric said of the numerous allegations.

As of the end of June, six allegations of sexual abuse and exploitation by peacekeepers had been reported since their arrival last fall, according to U.N. Conduct and Discipline reports. The U.N. secretary-general in the past has expressed his interest in starting to "name and shame" the countries whose peacekeepers are accused of misconduct, though calling out countries has its risks. The U.N. has no standing army and relies on member states to contribute troops and police for its missions.

The French military operation in the country commenced in 2013 to beef up a U.N.-backed military operation after the eruption of violent clashes between Christian fighters backing deposed president Francois Bozize and Muslim militia supporting the government of President Michel Djotodia in the capital city of Bangui. Since then, a joint operation by France and the African Union, authorized by the U.N. Security Council, has been taking place with the aim of restoring peace in the country. The U.N. peacekeepers moved there in August to help the 2,000 French troops who had previously struggled to stabilize the area.

Despite the presence of some 8,000 U.N. and 2,000 French peacekeepers in CAR, the ongoing chaos has led to the widespread killing of Muslims. Those who have survived have been placed in camps where there is no way out. After the mostly Muslim Seleka rebels seized power early in 2013, CAR has been in a state of crisis. Since then, sectarian violence has been escalating in central and eastern parts of the country, as the anti-Balaka, Christian militia forces started to launch attacks against the Seleka.
Last Update: Aug 13, 2015 1:11 am
RELATED TOPICS