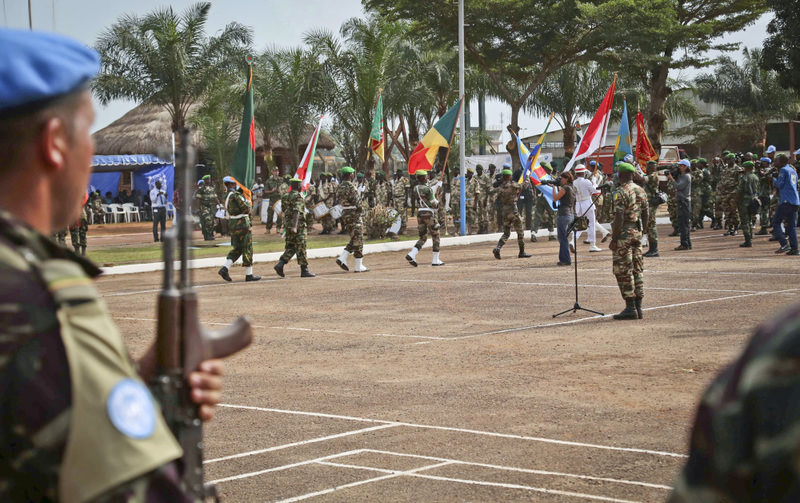 by Daily Sabah with Wires Aug 14, 2015 12:00 am
U.N. Secretary General Ban Ki-moon fired the head of the U.N. peacekeeping mission to the Central African Republic on Wednesday declaring "enough is enough" after a string of allegations of child sex abuse by peacekeepers in the country, Ban said. The U.N. chief told reporters he requested Babacar Gaye to leave his post after multiple allegations of sexual abuse and exploitation by U.N. peacekeepers, including an Amnesty International report Tuesday alleging that a 12-year-old girl was raped last week in the capital Bangui.

"I cannot put into words how anguished, angered and ashamed I am by recurrent reports over the years of sexual exploitation and abuse by U.N. forces," Ban told reporters. "When the United Nations deploys peacekeepers, we do so to protect the world's most vulnerable people in the world's most desperate places. I will not tolerate any action that causes people to replace trust with fear." Stephane Dujarric, Ban's spokesman, said that the U.N. chief's decision to remove Gaye was "unprecedented," noting that it was the result of a series of sex abuse cases. Gaye, 64, was appointed as the first head of the 12,000-strong the United Nations Multidimensional Integrated Stabilization Mission (MINUSCA) force in July of last year and is also Ban's special envoy to the Central African Republic.

Ban said he was convening a special session Thursday of the U.N. Security Council and would have a video conference with every mission chief, force commander and police commissioner to discuss the U.N.'s responsibility in investigating sexual abuse allegations. He called on troop-contributing countries, which are responsible for prosecuting perpetrators, to "take decisive preventive and punitive action." Ban addressed the press after human rights watchdog Amnesty International called for an urgent investigation into reports that a 12-year-old girl was raped on Aug. 2 during armed clashes in a Muslim enclave where U.N. troops from Rwanda and Cameroon were carrying out operations.

The rights organization said U.N. troops allegedly killed a 16-year-old boy and his father in the same area the following day when the troops began shooting at people indiscriminately. Dujarric said that there have been 57 cases of alleged misconduct, including 11 cases of possible sexual abuse, since the mission began in April 2014 in the Central African Republic. The U.N. chief pointedly appealed to victims of peacekeeper abuse to "please come forward." "You should feel no shame. Shame belongs to the perpetrators," he said. U.S. Ambassador Samantha Power, whose country is by far the biggest financial contributor to U.N. peacekeeping, also said she was "horrified" by the latest allegations and that perpetrators must be punished.

The U.N. has been under fire for failing to follow up with French authorities after a U.N. internal review in July 2014 found that children may have been sexually assaulted by French troops, who at the time were not under U.N. command.

The country has long been paralyzed by ongoing violence after mostly Muslim Seleka rebels seized power early in 2013. Since then, sectarian violence has been escalating in central and eastern parts of the country, as the anti-Balaka, Christian militia forces started to launch attacks against the Seleka. Despite the presence of some 8,000 U.N. and 2,000 French peacekeepers in CAR, the ongoing chaos has led to the widespread killing of Muslims.
RELATED TOPICS