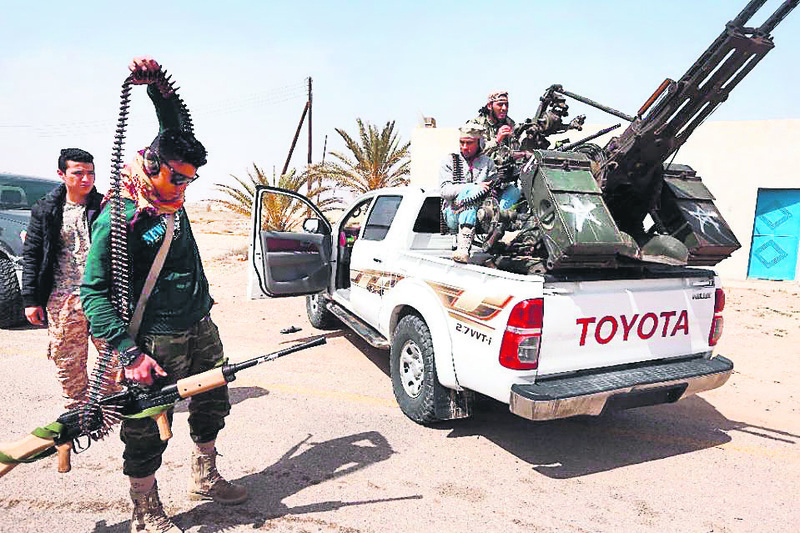 by Daily Sabah with Wires Aug 17, 2015 12:00 am
Libya's internationally recognized government has asked fellow Arab states to conduct air strikes against ISIS in the coastal city of Sirte, a cabinet statement said on Saturday. In the past few days, ISIS has crushed a revolt by a Salafist group and armed residents trying to break its grip on the city. Dozens of people have been killed, according to residents. The fighting typifies chaos in Libya, where two rival governments and parliaments, together with an assortment of tribesmen and armed groups, are battling for control of cities and regions, four years after the ousting of veteran leader Muammar Gadhafi. "Libya's temporary government urges... the Arab brother states...to conduct air strikes against positions of the ISIS terrorist group in Sirte," a cabinet statement said.

ISIS militants have beheaded 12 people and hung them on crosses during a battle for the coastal city of Sirte, the national news agency LANA reported Saturday. LANA said the 12 people beheaded were local gunmen who had been battling ISIS. The agency also reported that ISIS militants executed 22 other Sirte residents who had taken up arms against the group as they lay wounded in a city hospital. It said the militants also set the hospital on fire.

Libya's ambassador to France, Chibani Abuhamoud, told AFP on Friday that fighting in Sirte had left between 150 and 200 dead. "A real massacre is taking place, and we call on the international community to intervene," the diplomat said. The ambassador answers to Libya's internationally recognized government, which has taken refuge in the east of the country and is in a power struggle with a rival administration based in Tripoli. The Libyan ambassador said the fighting erupted after ISIS assassinated earlier this week an influential imam from the powerful Al-Farjan tribe. The militants have since been "massacring people, even killing people in their homes," Abuhamoud charged.

The official government has been based in eastern Libya since losing control of the capital Tripoli a year ago to a rival group, which set up its own administration. Neither government has control of Sirte, Gadhafi's hometown. Both governments have conducted air strikes against ISIS in Sirte in recent days but their capabilities are very limited, relying on outdated warplanes and helicopters from the Gadhafi era and lacking precision guns. It was not clear how Arab states would respond. An Arab coalition led by Saudi Arabia launched air strikes in Yemen in late March in an effort to stop the Iran-allied Houthi movement spreading across the country from the north.

Libya has suffered from a chronic absence of security as various actors have emerged. The powerlessness of the central government has led many people to take up arms against the government. State security forces have also failed to protect the government, leaving the country unprotected and open to heavy clashes between rival militias trying to gain authority over the government and the country. Peace and political stability seems far off as no rival militias have been strong enough to put an end to the ongoing war. The central government, in a state of continued turmoil, has long been at the mercy of militias that hope to integrate and build a national army against the interim government. After Moammar Gadhafi's ouster, the army has disintegrated, and the central government has gradually lost its power without having much effect on the ongoing violent clashes.
RELATED TOPICS