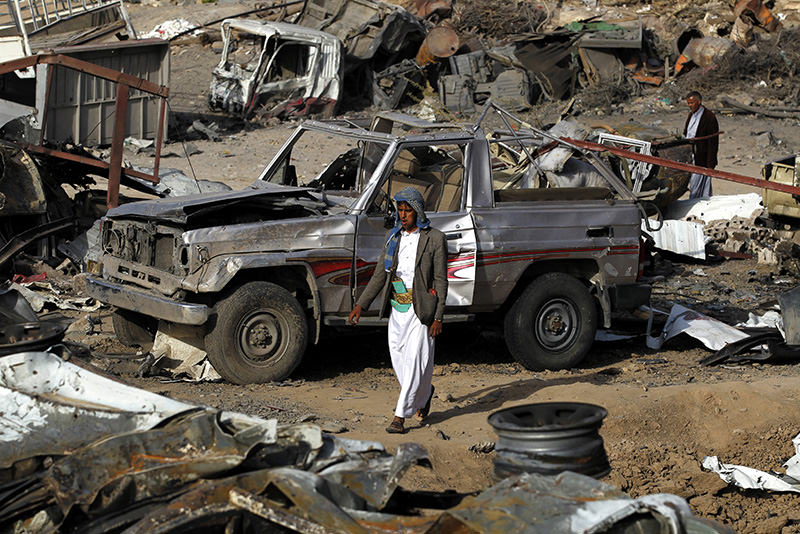 A Yemeni man walks past vehicles destroyed by a Saudi-led air strike targeting a neighborhood in Sanau2019a, Yemen, 20 September 2015 (EPA Photo)
by Anadolu Agency Sep 29, 2015 12:00 am
At least 151 people have been killed in fighting in Yemen during the last two weeks, increasing the civilian death toll to 2,355 over the last six months, the UN said on Tuesday.

Yemeni civilians have been caught up in fighting since March 26, when Saudi Arabia and its Arab allies launched an air campaign against the Shia Houthi militant group in Yemen.

Rupert Colville, spokesman for the UN's human rights agency, said on Tuesday: "In the two weeks from 11-24 September, a further 151 civilians have been killed -- including 26 children and 10 women -- and 151 injured in Yemen.

"This takes the total number of civilian casualties in the six months since 26 March to 7,217, including 2,355 killed and 4,862 wounded," he said at a press conference held in Geneva.

The UN admits that because of the "dire security situation" in the country, they were "unable to verify the vast majority of allegations of human rights violations and abuses or violations of humanitarian law".

"The high number of civilian casualties being caused by airstrikes was starkly underlined by reports that yesterday a wedding party in Wahijah, in Taizz Governorate, was hit by a coalition airstrike reportedly killing as many as 130 civilians, including a large number of women and children, and injuring many others.

"If the numbers are as high as suggested, this may be the single deadliest incident since the start of the conflict," Colville noted.

Yemen descended into chaos last September, when the Houthis overran the capital, Sanaa. In April, the Shia militia also managed to capture Yemen's southern Aden province, from which President Abd Rabbuh Mansur Hadi -- along with most of his government -- was forced to flee to Saudi Arabia.
Last Update: Sep 29, 2015 5:23 pm
RELATED TOPICS