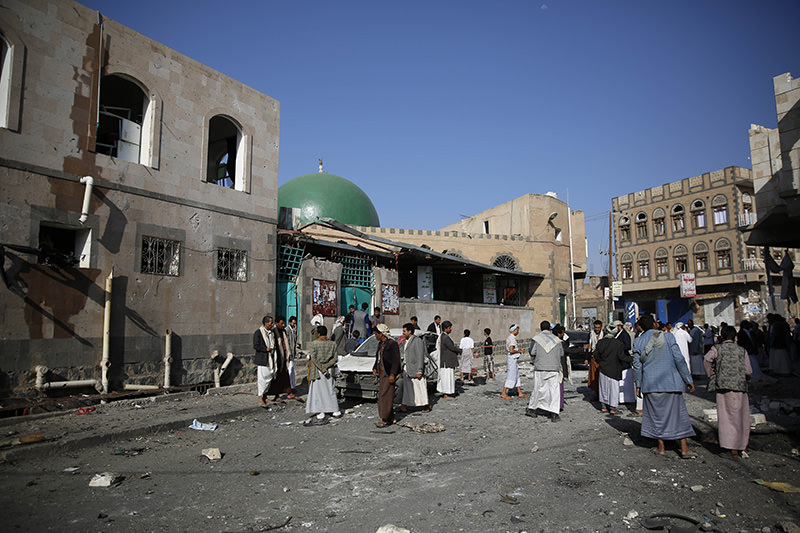 The addition of the extremist ISIS group, which holds a third of Syria and Iraq in its self-declared "caliphate," only would add further chaos to the civil war gripping the Arab world's poorest country. Up until Tuesday, the extremists largely targeted Shiites in Yemen as a myriad of forces fought over the ouster of internationally recognized President Abed Rabbo Mansour Hadi by the Shiite rebels known as Houthis.

The early morning attack on the Al Qasr Hotel & Resort, a large compound that Yemeni officials use as a headquarters, likely changed that. A blast struck the front of the 239-room hotel along the Arabian Sea, west of the port city's downtown, sending thick black smoke rising over it for hours as sirens wailed.

Two other attacks followed on locations used by troops from the United Arab Emirates, which has the most overt presence among coalition forces inside Yemen. Those assaults hit the palace of Sheikh Fareed Al Awlaqi, which Emirati troops and the Emirati Red Crescent had been using, as well as a nearby coalition military camp, the state-owned The National newspaper of Abu Dhabi reported.

Rajeh Badi, a spokesman for Yemen's exiled government, said all government ministers and the prime minister were safe and unhurt. He blamed suicide car bombers for the attacks.

That conflicted with the official Saudi Press Agency, which blamed incoming Russian-designed Katyusha rockets for the blasts. Those rockets are part of the Yemeni military stockpile that the Houthis, as well as al-Qaida's local branch in the country, have seized amid the war's chaos.

But by Tuesday afternoon, the new ISIS affiliate in Aden claimed the attacks in a message circulated by militant sympathizers online. It said four suicide bombers carried out the assault, which saw a truck bomb and a Humvee explode at the hotel, while two explosives-laden armoured vehicles exploded at a Saudi and Emirati military headquarters and an Emirati military administration building.

The Associated Press could not independently verify the message, though it was released like others by the group and carried its logos. It also named and included photographs of the supposed bombers.

Saudi and Emirati officials did not immediately comment on the ISIS claim. However, Anwar Gargash, the Emirati minister of state for foreign affairs, earlier had blamed the attack on the Houthis and their allies.

"The reality on the ground is they are fighting a losing battle. Their role on the ground has been reduced so they resort to mines, ambushes and rockets," Gargash said on his official Twitter account. He added that the attack on the Aden hotel "reinforces our need to destroy the forces of rebellion and destruction. We will continue in our endeavour until victory. And it is close."

Houthi media reported on the blasts in Aden, but did not claim the attacks.

Yemen has been embroiled in fighting that pits the Iran-backed Houthis and forces loyal to a former president against the Saudi-backed and internationally recognized government. The Saudi-led coalition has been carrying out airstrikes against the rebels and their allies since March, fearful of Iranian influence spreading across the Arabian Peninsula.

Others fighting the Houthis include southern separatists, local militias and extremists like Yemen's al-Qaida branch, considered by Washington to be the most-dangerous offshoot of the terror network.

Amid the chaos, ISIS affiliates have begun carrying out attacks in the country, beginning with suicide bombings March 20 in Yemen's capital, Sanaa, that killed 137 people and wounded 345.

Both the Emirates and Saudi Arabia are part of a U.S.-led coalition targeting the ISIS group in Iraq and Syria. Saudi Arabia also faces ISIS attacks in their kingdom.

But Tuesday's attacks, if confirmed as an ISIS assault, both escalates Yemen's civil war and marks the first time Emirati forces have been killed by one of the extremist group's bombings.

The Emirates has some 4,000 troops on the ground in Yemen, a senior Emirati commander said last month, and has military hardware there including tanks, armoured fighting vehicles and attack helicopters.

Tuesday's assault comes after a Sept. 4 missile attack on an ammunition depot at the Emirati forward operating base at Saffer in Marib province killed 52 Emirati troops, as well as at least 10 soldiers from Saudi Arabia and five from Bahrain. It was the heaviest military loss for the Emirates since its founding in 1971.

The war has taken a heavy toll on Yemen. More than 4,000 people have been killed, and the humanitarian crisis has left the impoverished country on the brink of famine. Violence continued into Tuesday night, as a bomb exploded near a mosque in Sanaa, killing seven people and wounding three, Yemen's Houthi-controlled state news agency reported.