German hunter shoots largest elephant in Africa for 30 years, bringing back memories of Cecil the Lion 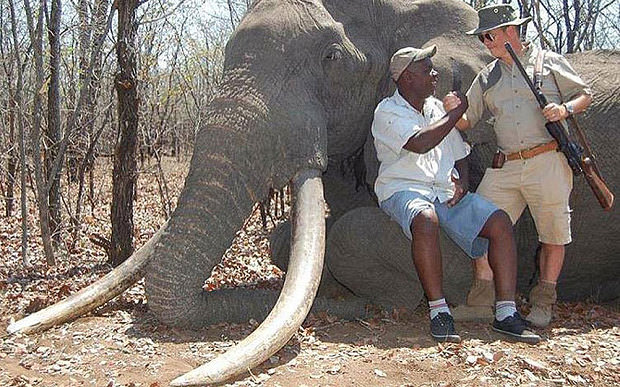 by Daily Sabah with AP Oct 16, 2015 12:00 am
A German hunter paid £38,000 in order to track and shoot one of the largest elephants seen in Africa for the past 30 years. The hunt took place in one of Zimbabwe's national parks, Gonarezhou Park.

To put the size of the elephant into perspective, the elephant's tusks weighed over 120 pounds. The elephant is estimated to be anywhere from 40 to 60 years old.

Surprisingly the elephant was not known to the staff at the Gonarezhou Park prior to the killing. Conservationists think it came from the Kruger Park because there are no physical borders between the parks.

The elephant was killed on October 8 and has drawn great ire from conversationalists on an international level as Cecil the Lion was brought back to memory with this killing.

Other rangers in Zimabwe's Hwange National Park have discovered the carcasses of 26 elephants at two locations, dead of cyanide poisoning along with 14 other elephants who were found last week, officials said Wednesday.

Parks spokeswoman Caroline Washaya Moyo said 14 tusks were recovered from these elephants and others were not recovered. She said rangers found 16 of the elephants in an area known as Lupande and 10 others in Chakabvi.

Washaya-Moyo said no arrests have been made and investigations are in progress. Rangers recovered one kilo (2.2 pounds) of cyanide and are increasing patrols in the park, she said. Cyanide is widely used in Zimbabwe's mining industry and is easy to obtain.

"The poachers were probably disturbed by rangers on patrol, which is why some of the tusks were recovered. Cyanide poisoning is becoming a huge problem here and we are struggling to contain it," Trevor Lane, founder of Bhejani Trust and a leading wildlife conservationist told The Associated Press.

Last week, the parks agency reported that 14 elephants were poisoned by cyanide in in three separate incidents. In 2013, as many as 300 elephants died in Hwange park after poachers laced salt pans with cyanide.

"All this poaching is because of American policies, they are banning sport hunting. An elephant would cost $120,000 in sport hunting but a tourist pays only $10 to view the same elephant," she said, adding money from sport hunting is crucial in conservation efforts.
Last Update: Oct 16, 2015 4:43 pm
RELATED TOPICS