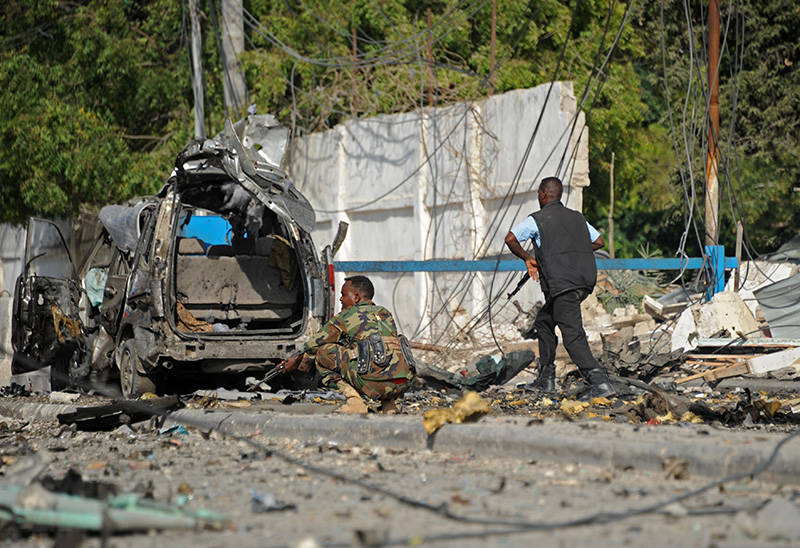 "It's over now, we have killed all the attackers." said Ahmed.

"They came under cover of darkness and attacked the hotel while some of the guards were sleeping," he said.

The attack started at daybreak when a suicide bomber detonated a vehicle laden with explosives at the gate of the Sahafi Hotel and then gunmen ran into the hotel and shot at people, police Capt. Mohamed Hussein said.

"They have killed the owner of the hotel, a former military general, and other officials during the attack," Hussein said by phone.

A second explosion came from a car bomb outside the hotel, said witnesses.

Somali troops and African Union forces went to the scene and took control of the hotel, according to a Twitter post by the African Union Mission in Somalia, which has deployed troops to bolster Somalia's government against al-Shabab's insurgency.

One photographer was among those killed and another was injured, according to witnesses.

"I was at the scene of the explosion busy taking photos when a vehicle full of explosives exploded beside me. I fell on the ground and saw part of my body bleeding, I was with another journalist who was killed in the attack," said Feisal Omar, who has since been discharged from the Mogadishu hospital.

The Sahafi Hotel is often frequented by Somali government officials and business executives and it has been targeted before. Two French security advisers were abducted from the hotel by militants in 2009.

Despite being forced out of Mogadishu and many other cities and towns across Somalia, al Shabab continues to launch lethal attacks in the capital and elsewhere. Al-Shabab is fighting to oust the Mogadishu government and install a strict version of Shariah law. Al-Shabab have also attacked neighboring countries that have sent troops to support the Mogadishu government. The extremist rebels killed 148 people in an attack on a college in Garissa, Kenya in April.
Last Update: Nov 01, 2015 4:29 pm