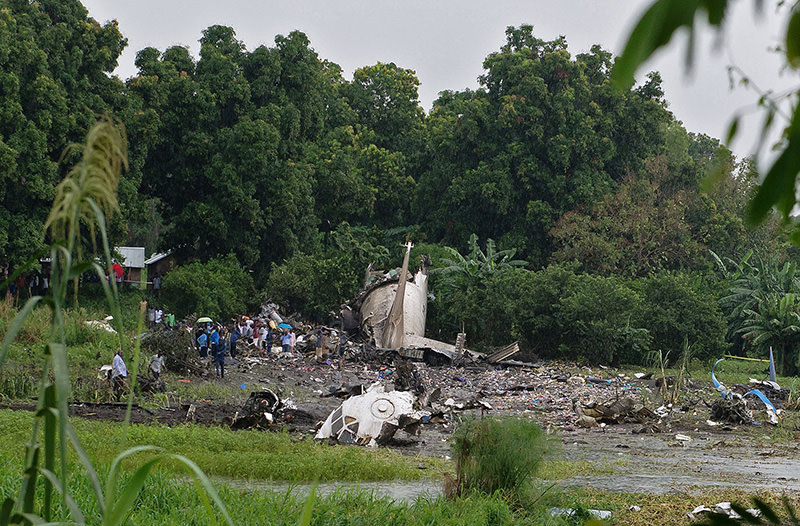 People gather at the site where a cargo plane crashed into a small farming community on a small island close to Juba airport, on Nov 4, 2015 (AFP photo)
by Nov 04, 2015 12:00 am
At least 36 people were killed Wednesday when a plane crashed shortly after taking off from South Sudan's capital Juba, rescue workers said.

Police and rescue workers pulled bodies of men, women and children out of the wreckage of the Russian-built Antonov An-12 cargo plane, which smashed into a farming community on an island on the White Nile river, seconds after taking off.

"So far 36 bodies have been collected and brought to hospitals," South Sudan Red Cross official Majju Hillary told AFP, adding that all those killed had been on board the airplane.

Two survivors were pulled out of the twisted metal hulk of the plane but one of those later died, with a young boy the only survivor, the Red Cross said, adding the number of dead may still rise.

"We can't assess this is the final toll, as some debris is too heavy to be lifted and needs some heavy machinery," Hillary added.

The five-member Armenian crew were all killed, the Armenian embassy in Egypt said in a statement.

The main fuselage of the plane ploughed into thick woodland, with debris scattered around the riverbank in a wide area, according to an AFP reporter at the site.

Police at the site said they did not know how many had been on board the plane when it crashed -- nor if people may have been hit when it smashed into the island -- and so were unable to give an official death toll.

The island is home to several small farming communities.

Juba's airport is the busiest in the war-torn country, which is the size of Spain and Portugal combined but with few tarred roads.

The airport hosts regular commercial flights, as well as a constant string of military aircraft and cargo planes delivering aid to remote regions cut off by road.

Civil war broke out in December 2013 when President Salva Kiir accused his former deputy Riek Machar of planning a coup, setting off a cycle of retaliatory killings that has split the poverty-stricken, landlocked country along ethnic lines.

Fighting continues despite an August peace deal, but battles today are far from the capital.

Tens of thousands have been killed, and UN-backed experts have warned of the "concrete risk of famine" before the end of the year, if fighting continues and aid does not reach the hardest-hit areas.
Last Update: Nov 04, 2015 4:52 pm
RELATED TOPICS