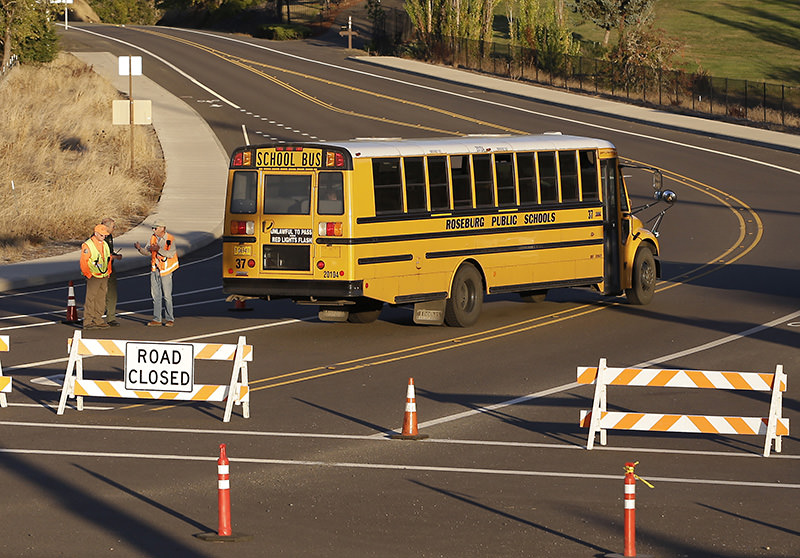 A bus passes through a roadblock leading to Umpqua Community College, Friday, Oct. 2, 2015, in Roseburg, Ore, the U.S. (AP photo)
by Anadolu Agency Nov 05, 2015 12:00 am
A math student is facing a school disciplinary hearing after he stole a bus to drive himself and other students to an exam, a school official said Thursday.

Le-Aan Adonis jumped behind the wheel of the bus after he and fellow pupils, who were due to sit a crucial test that day, found the bus parked at the usual stop but with no sign of the driver.

After finding the keys, Le-Aan decided to get his classmates to their final-year high school exam and drive the 30 kilometers (19 miles) from Betty's Bay, southeast of Cape Town, to school.

"The school has a civil duty of not endorsing such behavior but also to acknowledge the situation at hand," Idy Adams, the principal of Hawston Secondary School, told Anadolu Agency.

"The disciplinary hearing will take into account the rights and the wrongs to be all fair."

"I got on to the bus. One boy told me he had to get to school to write this subject because it was very important to him and for me too," Le-Aan told local TV station eNCA. "What were we going to do if all of us were unable to write the exam?"

Twenty-year-old Le-Aan, who like many South Africans continued his school career into adulthood, was stopped by a traffic officer during the journey on Monday and fined 5,000 rand ($360) for not having a driver's permit.

Bus company Hanekoms has offered to cover the traffic fine while former provincial police commissioner Lennit Max has announced he will represent Le-Aan at the disciplinary hearing.

"The story touched me because I had to leave school and worked as a farm laborer and later on the railways because I didn't have the privilege of completing matric," Max said, according to the Daily Voice newspaper.