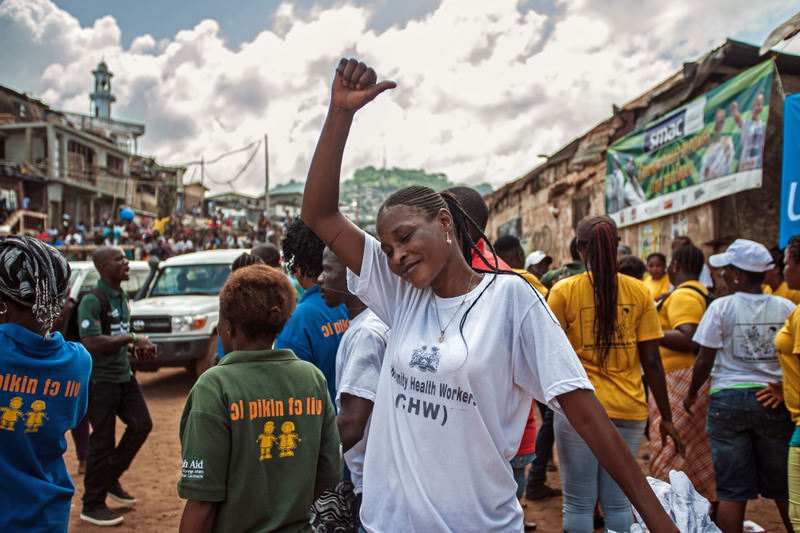 by Associated Press
Nov 09, 2015 12:00 am
Cheers erupted and people danced in the streets Saturday as Sierra Leone marked the end of the Ebola outbreak within its borders, although neighboring Guinea still struggles to stamp out the deadly virus that has killed more than 11,000 mostly in West Africa.

Nearly 4,000 people have died in Sierra Leone of Ebola since the outbreak began in late 2013. The World Health Organization said 42 days have passed since the country's last confirmed Ebola patient was discharged on Sept. 25 after two consecutive negative test results.

Hundreds of people celebrated in the streets of the capital, Freetown, when Anders Nordstrom, Sierra Leone representative for the World Health Organization, declared the end of the Ebola outbreak. "WHO commends the government and people of Sierra Leone for the significant achievement of ending this Ebola outbreak," he said. A country must go 42 days equal to two 21-day incubation periods without an Ebola case in order for WHO to declare it free of Ebola transmission. It's a benchmark that neighboring Liberia reached in May only to then experience a brief reappearance of cases before it was declared Ebola-free again in September.

Sierra Leone now enters a 90-day intensive surveillance period. "We have prevailed over an evil virus. We persevered and we have overcome. We must not let down our guard," said Sierra Leone President Ernest Bai Koroma.

Dead bodies will continue to be swabbed and safe burials will continue for all suspicious cases, he said, adding that they will retain adequate laboratory capacity for tests. He said he is asking parliament to lift a state of emergency.

Congratulatory messages poured in, including from the United States, which also warned that vigilance must continue.

Sheikh Fomba Swarray, chief Imam at the Madingo Central Mosque in Freetown, said he was cautiously optimistic. "As long as a similar declaration has not been made in Guinea, I will always feel we are being hunted by the Ebola disease," he said. "The threat from Guinea is the saddest part of this ceremony."

Guinea, where the epidemic began, now remains the only country struggling to rid itself of the disease. WHO has recorded seven new cases in neighboring Guinea in the past 21 days. Fode Tass Sylla, spokesman for Guinea's Ebola task force, said Guineans have abandoned preventative measures in the past three months. "They shake hands, they don't wash their hands. And in some cases people have deserted sanitary health services to see traditional healers," he said. A woman left Conakry for Forecariah to see a traditional healer in September, infecting others, Sylla said. She and the healer died, and Sylla said six cases now remain there. An awareness campaign will resume and villages where the virus persists must be isolated, he said. "Ebola loves disorder, unsanitary conditions and indiscipline. In Guinea, these three factors are dominant in our everyday behavior. That's why Ebola has a bright future here," said 44-year-old health worker Mamady Kouroumah. WHO, which will maintain staff in Sierra Leone, has been criticized for its response to the outbreak, as weak leadership, shoddy supplies and infighting worsened the battle against the disease.